There Was a Wrong Way? 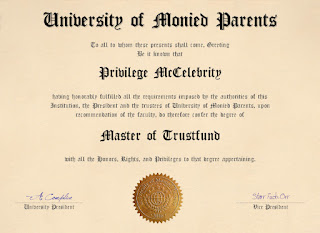 I have to admit, when I first saw this story about rich people gaming the college entrance system for their kids, I thought, "Huh. There's a wrong way for parents to bribe their kids' way into college?" But it isn't really a laughing matter.

Going back to my own college entry: I literally lack an ambition gland and barely had a clear idea what I wanted to do with myself when I got to college. What I knew I wanted to not do was waste my parents' money because they worked and saved hard for it, and I wanted therefore to just not fuck up. I got a part-time receptionist job to pay for some of my incidentals, but I lived at home and I basically didn't care about whether my school had prestige--I cared about whether I got a college experience.

I know this sounds weird--to my mind, there was a lot of truth in the idea that you "could lead an ass to Harvard, but you couldn't make him think."  I didn't know exactly what I wanted to do, but I realized higher ed would help me sort myself because I could use the generous class catalog to figure out what really interested me and turned me on. Regardless of what school I attended, if I had access to the learning, I would be educated. I realized I was a writer, and a close-reader and knew, after four years, I better get a practical job, because the intellectual path for me was never going to be practical.

That's privilege. But I still considered the point was that I earned my place there with my test scores, high school grades and extra-curriculars, and when I graduated, I did so because I worked at it. I understood what education meant.

What these parents did by cheating the system was cheat their kids out of that experience. They taught their kids that money and deception, not hard work, was what they needed to get by. They taught them they didn't need to earn it because there were other ways to be "deserving".

They also cheated more deserving students who had worked hard out of an opportunity to be where their kids were, which is maddening. But thinking about the value of school as being about the "name brand" of the school itself, not the education provided, demonstrates that no matter what they paid, the real value was lost on them.

Posted by Vixen Strangely at 1:10 AM