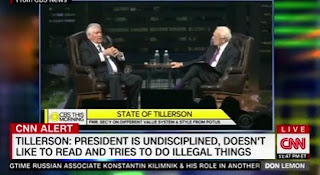 One way to set the stage for a busy news Friday is to note that former Secretary of State Rex Tillerson recently sort of read President Trump for filth by saying things that Trump critics don't even find surprising:

“So often, the president would say here’s what I want to do and here’s how I want to do it, and I would have to say to him, ‘Mr. President I understand what you want to do but you can’t do it that way. It violates the law. It violates treaty,’’ Tillerson said, before reiterating a claim he made before he was ousted on March 13—that “there’s no question” Russia meddled in the 2016 election.

Trump did not take that well, and of course made a Tweet about it. But leaving that specific kind of knee-jerk response to things happening around him, here is a sample of Trump's "Boom" Twitter stylings (the venting Trump seems to do to keep his head from exploding when the pressure is on): 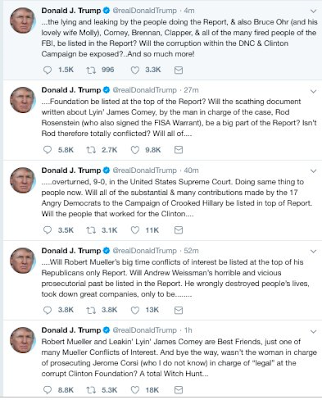 Yeah. I'm not going to bother refuting that hot mess. I'm just pointing it out as a symptom of a person who is not suffering from a case of anything "very legal and very cool" .  This is a person who is actually being sued over his bullshit charity, and over the emoluments clause. New York is also investigating possible tax fraud based on a well-researched report on how Trump got so "rich" (tax evasion, inheritance and super groovy loans!) This is a person who, during the 2016 presidential campaign, settled for millions over Trump University that was an actual scam (a settlement not so long ago approved, by the way).  Even if there is no Trump/Russia collusion, there is the definitely not okay hush money paid to mistresses which are basically illegal campaign donations, and his probably illegal campaign coordination with the NRA. Trump's way of life is experiencing legal jeopardy because of things he does, and then kind of denying that they even happened even though we are looking right at him. It has mostly worked for him, but I don't think he's ever tried to spin so many plates at one time.

Take the response he made to the filings today regarding former lawyer Michael Cohen and former campaign manager Paul Manafort:

I think a Tweet that claims he's totally cleared is pretty weird considering he is basically factually named as "Individual-1" who seems to have suborned perjury and directed campaign fraud, which are crimes. A really good explainer of the Friday filings is laid out at Lawfare. But I'm struck by the idea that  Trump's response to this is a flat-out denial, when we were told by Trump that his lawyer Rudy Giuliani (who apparently occasionally experiences nightmares),  has an 87 page rebuttal to Mueller's claims.  Or, well, maybe there actually isn't anything.

Tillerson told us Trump doesn't like to read things--is Trump counting on his fan club also not reading the black and white reality that a good part of Trump's 2016 campaign performance was fraudulent and that he really doesn't care what "legal" means even though he gave an oath to uphold the Constitution?

Well, I guess that is probably close to the truth. As I see it, the unredacted Flynn and Manafort bits of this week's filings are likely disturbing, but the parts that have been made plain as day are well and truly bad enough. And I still think we've only seen the part of the iceberg above water.

Posted by Vixen Strangely at 1:38 AM