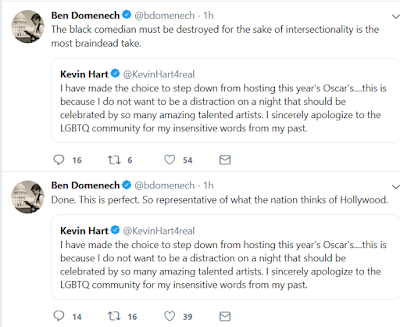 So, Kevin Hart, who is really a talented and likeable performer, was picked to host the Oscars, but the problem was, he used to say some pretty homophobic shit. It was offensive, and he recognized it enough to delete his previous Tweets, but people screenshot them because whoa!, and instead of apologizing, Hart sort of responded at first about how he was changed, but didn't exactly apologize or acknowledge how he knew what he said was wrong, and it just wasn't enough. Saying you've evolved pretty much means putting your better ideals into action, and he realized this shitstorm was something he owned, and he posted a Tweet that showed he owned where he went wrong, and stepped aside.

And that seems like a reasonable trajectory. Losing out on one gig isn't getting his career ended, and you can still like Kevin Hart's work otherwise and it really takes a lot to actually get one's career so fucked that, once a star, one doesn't work again. Mel Gibson still gets work, ok?

Ben Domenech wants to make a couple of points, here: Hollywood is two-faced because it celebrates black artists but then holds them to account when they have fucked up, that regular people hate Hollywood values because apparently that's the only place the gays are, that voluntarily choosing not to accept a job when it become controversial is solely the business of the "Liberals What Are in Charge of the Whole Entertainment Shebang" and there is a thing called "intersectionality" and it is really scary and fuck that thing.

So much ignorance there, Mt. McCain. See, I get where Kevin Hart is coming from: he went to George Washington HS and is a Gen X-er and I went to Northeast HS and graduated about six years before he did.  My frame of reference is Philadelphia and the culture we grew up with in that time. I listened to rap music that referenced f------ and this was how people talked around me, even though I was already recognizing I wasn't exactly straight. I don't know what language Hart was specifically raised with (his mother was a University professor) in the home, but we had anti-LGBT language in our experience; I did, I know he did. His perspective as a black male (intersectionality) may have informed his observation that life as both black and gay would be undesirable because of the way gay people were treated, but the reality is that gay and black people exist, and instead of counseling them to deny their existence, the empathetic course is to show them the love some retrograde parts of the world won't.

I don't necessarily think Hart is being held more to account here than a white artist having said the same things would be (although this is a reasonable distinction to draw--I would unquestionably want a white artist to be considered equally suspect for homophobic language). But part of his commentary was about his potential child displaying non-heteronormative behavior, and being punished not for even being gay, but for behaving in a way that could be perceived this way. Little kids have been beaten and killed by their parents for this kind of thinking. This is what kills so many gay or non-heteronormative-presenting kids all the time: the lack of support, denial of validity, the coached expectations to just try being straight, as if this was a choice, not an essential part of one's selfness. They are beaten, or disowned and put out on the street, or they suicide.

The harm of this language and what it means to LGBT people is real. His perspective might have been explained by culture and immaturity, but he made these statement when he was grown enough to know better and have seen better, and the gripe that he is being punished for them now seems to stem not from whether Hart's response was too little and too late, but from a culture (conservatism) that really has no problem at all with actual homophobia. With decreeing that gay or trans persons shouldn't fully participate in the military service or public life. With denying job protections against discrimination.

Kevin Hart is a talented comedian and I enjoy most of his work, but this is a problematic area. I think we need to get to where we can recognize that not all places and people experience "wokeness" vis a vis all cultural intersections at the same rate, but credit should be granted for trying. The culture war response downgrades the idea that one should even bother doing better, and this helps exactly no one. I don't want his career wrecked and don't think it will be. I just think he can do better and should. And if he's the guy I think he is, he will do better. (And sometimes I'm wrong, but here's me, doing the benefit of the doubt thing.)

Ben Domenech can also do better. I just don't have the same faith he will. Because his team seems to reward bullshit signifying (sort of a RW version of "virtue-signaling", I guess, where there is surely signals, but the actual virtue is harder to place).
Posted by Vixen Strangely at 2:41 AM