This is A Law and Order TrumpWorld Grab-Bag 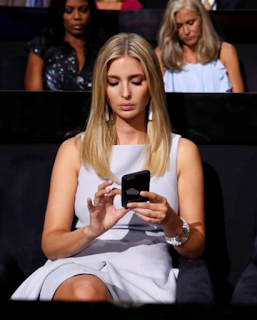 One of the most compelling stories about the 2016 election was the epic story of hubris wrought from the media bards about the hero, Hillary, who would have been President, but for her emails.  Her Republican challenger, Donald Trump, who won the electoral vote (albeit, it must be pointed out, not the popular vote) was a known scumbag. He was a dodgy, several-times bankrupt businessman, a more or less open racist, a conspiracy theorist, and a probable sex pest.  But, we were supposed to understand, the utter wretchedness of setting up a private server, even if no wrongdoing concerning it could be established, was entirely enough to dog her candidacy. Because using private email, even if it was done by previous Secretaries of State, was made a retroactively radioactive thing, and it should follow, therefore, that subsequent practitioners of the art of politics of the White House and environs should, obviously, practice extraordinary scruples regarding their email activity.

Or, well no, of course, the "smart one: Ivanka Trump, would not be fully compliant with email regs because no one in the Trump Administration was expected to. The laws pertaining to transparency, retention, etc., were for Hillary Clinton as Secretary of State ex post facto, but not going forward for people who were Team Trump. Or so Trump would care to allege, maintaining that Ivanka deleted nothing, even if she withheld rather a lot of her email output and influx.

One might wonder, what with all this Ivanka email-business, what Trump's Acting AG might have to say about it--and if this were about Hillary Clinton, Matt Whitaker would obviously be down with prosecution.  Which seems so convenient, because Donald Trump would have actually very much wanted someone to head his Justice Department who wanted to prosecute Hillary Clinton, and actually, while we're at it, James Comey. Of course, intelligent legal folks like Don McGahn drew up reasons why this would be probably obstruction of justice and seriously impeachable.

Which is no reason to believe Trump thought these advisors were right in that he might be liable. After all, as I've mentioned before, in Trump's mind, he isn't a public servant himself, and other public servants should serve himself as being the sort of CEO of America Inc. He's never really grasped that the oath of office he took was more than a formality, or that acting in pure self-interest was in any way a conflict with his greater duty towards the Constitution and the nation for which it stands.

But his man, Whitaker, does seem to be some kind of conflicted--in that he was the sole employee of a PAC funded by dark money, that paid him really big bucks for what I have to assume was the political equivalent of wet work. Basically, he was a central casting "leg breaker sent from Back East"--a guy who could be counted on to do political assassinations.

I can see why this guy appeals to Trump. He gets the dynamic. But I don't think he sees where the naked, throbbing, political boner for his enemies of it all, is probably not on his side, legally. Because this is still all of a piece with his obstruction of justice bullshit.  Because he likes to talk about "law and order!", but he does not know what that even is.

Speaking of which, he made an abundantly dumb and sort of self-revealing statement about KSA's rogue Prince KSA and the likely murder and mutilation of the journalist Khashoggi.  "It is what it is." It's a nasty world, anyway. Isn't the Saudi government paying already to be absolved for these things because of figures Trump has entirely made up?

He has no moral center. He could very well be selling out all sides.

Posted by Vixen Strangely at 12:56 AM

I'm beginning to get the impression that you're not fond of our President. Of course, even a stopped clock is right twice a day, and when this is not recognized one has to wonder if there is animation from the point of view of sour grapes. You k\now, President Trump has been getting favorable comments from people on the left about his initiatives for prison reform.

At his level of business it is not uncommon for people to use the bankruptcy laws. Now, were one to declare bankruptcy and go into dissolution that would be one thing. However, Trump has come back from this in spectacular fashion a number of times. For someone of Trump's level, using the bankruptcy laws is like an ordinary person selling a stock short or using puts to protect long positions. It might seem like a big deal, but compared with his overall success it is understandable. Did you know that at business schools sometimes people do graduate work by studying Trump's business career?

I have to say that no one that I know (including some Democrats) think that Trump is a racist, a word so overused it has virtually lost its meaning. (The other day citizens of Tijuana were protesting Honduran immigrants clogging up the city, and Univision Anchor Enrique Acevedo referred to them as racist even though they are of the same race as Hondurans. Your dad and I are old enough to remember what racism really is.)

I certainly would not expect you to agree, but I think Trump has done the right thing in maintaining the US's alliance with Saudi Arabia. But then as a Vietnam vet, I was raised in a pretty tough school and early on discovered sacrifices sometimes have to be made for something important.

At any rate, most of the incessant arguments against Trump I hear are simply invidious. It's rarely a matter of simply disliking him or seeing him in a bad light; it is almost a crazed level of trying to see President Trump as Professor Moriarty.

I haven't seen any of your poetry lately, and I always see you as a good poet. It would be a shame to ignore such talent.

Trump went into scams like Trump University and became a reality tv star. He regularly today violates the emoluments clause. You are badly mistaken about what Trump's financial acumen is. His kids steal from cancer charities. I don't hate Trump because I see him as Moriarty--he ain't that good. He is a type East Coast libs know well enough--he's a bigmouth ass.


Trump's business credit score is a shambles and he's been relying on foreign banks lending him money, his casino businesses are in the toilet and some of his golf courses don't turn a profit, my dad still says the n-word even if I cringe and I am old enough to know what racism is because I am today years old. Proud Boys and other dipshits tried to parade in my city, and had to get told. Weird-beards like Gavin McInnis have to shy away from the fashion-fashy's they made for fear that they won't be forward-employable--but nonetheless, a certain kind of Fox-Newsy version of suburban-cozy racism stays sort of simmering for people who like that sort of tea. Lewd Obbs comes to mind as providing a gentle, frothing, entirely potty brew of "brown folx are poisoning our soil with leprosy and Spanish-speaking" for people who need to hear that sort of thing. Hannity and Carlson are favorites of 3%'s and other militia people. Some of whom are oath-keepers, and have quite nice, safe, wholesome, law enforcement jobs, and would also burn crosses or human beings under the right circumstances.

Saudi Arabia has one, count it, one resource--oil, which isn't even really entirely necessary in the world--we have other technologies and mostly just fail to use them. SA has actually tried to keep oil prices low deliberately because they have it falling out of their asses in a way other countries do not, but this doesn't really do us or anyone else any good in the long run--and no one benefits from any country jailing and torturing feminists, atheists, free speech advocates and journalists, which is exactly what SA does.

As for prison reform--ending three strikes and retroactively resentencing inmates according to updated guidelines strikes me as a good start for people who deserve an opportunity to re-emerge from prison-life to a better path. I'm not opposed to Trump siding with serving justice, and will admit that in hindsight, the condition that brought us three-strikes and zero-tolerance type rules came from a very different crime picture. The late 80's and 90's were more generally crime-ridden. But these laws provided a solution that was unnecessarily punitive and left their mark especially on communities that were "over-policed"--in that discrepancies in law enforcement based on racial demographics broke up families and increased poverty while decreasing opportunities. No argument from me--if Trump wants to support fixing that, he's on the right track--about one thing. But being right on one thing doesn't make him right on the main--and as far as I know, he's still nonsense about the environment, lying about Russia's influence on the elections, covering up the Khashoggi murder, wrong about the Iran nuclear deal, too cozy with our home-based theocrats, violent in rhetoric regarding our journalists and dismissive of what freedom of the press should mean, incredibly off-base about his North Korean expectations, and about the Middle East peace process (both because he had no idea of the history--this is a bug, FACT, not a feature), incapable of being effective or even remotely consoling in the wake of a natural (hurricane, wildfire) or even unnatural (mas shooting) tragedy, and is cowardly when it comes to speaking out against those he thinks he might need later--Putin. Racists. Kim. Prince MSB.


Go ahead and think it is weird for me to dislike a lying, soft handed, dissolute, racist, ignorant, narcissist, authoritarian shit for brains who doesn't grasp concepts like rule of law or obstruction of justice or separation of powers. If conservatives thought Obama was an "appeaser" because of anything he ever did--why is Trump's knee jerk salute to a North Korean general, let alone his knee jerk pretending they don't still have nuclear testing, ok? Why is it cool if Trump sucks MBS's dick for low prices at the pump when he ordered a US resident journalist killed, and why is it supposedly ok for Trump to say "enemy of the people" regarding journalists, and then allow that maybe Khashoggi's murder was ok because he was an "enemy" to KSA?

As an opinion journalist, I needed a break from my blog to write, at all. I needed to get my head straight, and understand why I was writing this blog. As a poet, I need to have honesty and a kind of security to feel like singing. These times don't feel like great times to be a poet. I still have the music, I just can't supply the right words, at the moment.