Rake-Stepping in the Deep Schitt 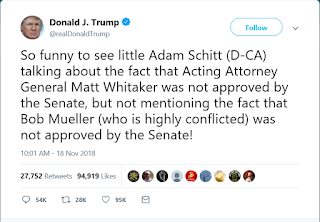 After posting the above Tweet (which I've screen-capped several hours after the fact, on the off-chance that someone will decide it was a mistake, eventually) which reads:

Trump received high-fives from, like, half the kids in his fifth grade class. "Schitt", being a couple of letters off from Schiff, would be unfortunate enough for him to Tweet out if it were a typo. As an actual indicator of the President's level of maturity and "decorum" (a new favorite vocabulary word of his)--it's childish and sad. But it's typical of this President to lash out and demean people he suspects of being against him, whether it is the ranking Democrat on the House Intelligence Committee, or the former Navy SEAL who oversaw the mission that ended Bin Laden.

It's something of an inglorious capper to a week in which Trump perpetuated some of his voter fraud myths by somehow suggesting that anyone who buys cereal at the store has voter ID, and that Finland manages wildfires by raking the forest.  (He alleges he heard this from the President of Finland, but then again, he may believe the president of Finland is this "Tom Of" who has been recognized more and more.)

It would be pretty merciful to assume that "Schitt" is a typo, but he's deleted things that were typos before, and he definitely has referred to assorted public figures by crude nicknames before as well, so I am taking this to be an "on purpose" spelling. As to the rest of his tweet, it is not really true that Bob Mueller has not been approved by the Senate--he certainly was approved by the Senate, unanimously, when appointed by George W. Bush as FBI Director, which had been extended another couple of years under Obama. There is an Appointments Clause issue with respects to Whitaker that I'm probably not qualified to blather about, but I will say that the "highly conflicted" thing Trump wants to bring up about Mueller, as far as I know, is the dumb thing where he used to have a Trump golf membership, and then ended it.

I know, right? He just stopped paying a lot of money to play golf for some reason (like, it's a lot of money and maybe he never played that much golf?) --and to Trump, this is a highly personal thing. Worthy of Mueller now being like Ahab to Trump's big orange whale?

Maybe now that subpoena power is in the hands of House Democrats, and that Rep. Maxine Waters, who Trump has regularly delighted in calling "low IQ", has the ability to request his tax returns, it's Trump who has worries about being, not in "little", but "deep Schitt".  And maybe this fool, who threw absorbent towels at the victims of a flood, and now suggests Californians should have raked their forests (federally-controlled forests) during a national tragedy that has claimed dozens of lives and left over a thousand missing and tens of thousands homeless, should consider whether he wants to be raked over the coals yet again for his inability to appropriately respond to what is happening around him.

Because once again, he is falling for this "vehement disavowal" and denial regarding Prince Mbs and Khashoggi that he did regarding Putin and our elections at Helsinki and North Korea and their nuke program and who knows how many times he doesn't want to face things that make him feel sad. He'll even give plausible deniability to a natural disaster, if it only hurts people he doesn't care about.

It is sad but true that the loudest bullies are often the worst cowards and the most pitiful fools. This seems to be who Trump is. There is nothing better we can expect.
Posted by Vixen Strangely at 12:06 AM

I've taken off from blogging because I already waste so much brain power on Traitor Trump and his Crime Family but, what worries me is the penchant for Conservatives to dive deeper and reach further for a more despicable candidate each and every time. At this time, Trump is not worse than W and Cheney; they wrought death and destruction for MILLIONS of people. Trump at this point is more or less reading the scripts he and his handlers have prepared for his Celebrity Apprentice Presidency.

Including the Lock Up HRC storyline which Trump can't abandon. But, besides signing every piece of crap legislation put in front of him by the 2016-2018 Republican Congress and bullhorning White SupremacyTrump has really only been interested in Swindling the US Treasury.

Now, come 2019... that's when things could change for the worse. If Mueller is actually going to do anything and if Trump feels threatened by the Democratic House. The border seems to be the flashpoint but, I hope I am wrong.