Not Too Jaded, This TrumpWorld Grab-Bag 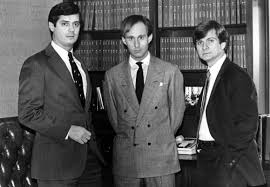 In a way, I feel a little trepidation stepping back into doing a TrumpWorld Grab-Bag blogpost, because they are pretty obsessive. It requires paying a lot of attention to little stories and trying to weave them together, which I don't necessarily have the time to do that I once did. I don't have any specialized knowledge (like, you know, legal stuff) or connections or insider tidbits. But I do read a shit-ton of news, and this is the internet, and I have one of those weird brains that likes sorting out details. Of course, I haven't done this for simply months.

And yet! One thing I have gained from my self-imposed vacation is that I have rested the little grey cells and am a bit less jaded than some Mueller/Russia investigation observers.  There were any number of Twitterati who were of the very strong opinion that surely, with the elections a fait accompli, Robert Mueller would now be handing out indictments like so much Halloween candy, certainly by Friday of this week.  Now that we are on the other side of midnight from Friday, the lack of a Don Jr. perp-walk (which seems like too much to ask of the times we live in, but people will dream!) might seem anticlimactic, but as for me, things continue to look pretty interesting.

For one thing, Trump basically fired his AG Jeff Sessions, largely because he never understood that by recusing from the Russia investigation, Session was doing him a solid. The President appears to suffer from the appalling idea that public servants are his servants, and doesn't entirely grasp that they give an oath to the Constitution, not to him, and clearly believed that Sessions' job was to be involved in limiting, ending, or waylaying the Comey investigation (at first) to help Trump. However, if Trump was ever to get any inkling that there are proprieties to be observed, the fallout from firing former FBI director Comey should have been a lesson in "what not to do". To wit: Trump fires Jim Comey for "reasons", partially because he claims the Clinton email investigation was handled badly, and had Sessions and Rosenstein fig leaf that justification with letters that sound serious enough, and then blows that reason up in a nationally-viewed interview with Lester Holt. (He also tells a few Russians, in a particularly stupid way.) And that is how he ended up with a Special Counsel.

So how does he go about the firing of his AG this time out? Well, for one thing, he picks a very Trump-sympathetic hack (Bigfoots! Time travel hot-tubs! Massive hog toilets!) and then lets it be known he basically picked this person because he was a Trump-sympathetic hack. This might be construed, even to a layperson like myself, like even more obstruction of justice. (Like the Sally Yates, Andrew McCabe, Peter Strzok, Lisa Page, etc., things.) But then he has so little idea that what he is doing is abusive of justice, he just says what he did!

Meanwhile, the Mueller investigation does it's quiet and necessary work, despite obstacles. For one thing, an indictment made by Mueller's team against a Russian troll farm was upheld by a Trump-appointed judge. This is good news. (For another bit of good news this week, another Trump appointed judge ordered CNN reporter Jim Acosta's WH hard pass be restored, in a pretty refreshing victory for the 1st Amendment and reminder of judicial independence. )  Of note is that the indictment was about conspiring to defraud the US government. Free speech is one thing, but there are applications of speech that are by no means acceptable--for a recent example, the harassment of a Jewish woman by white supremacists was found not to be covered.

Another interesting detail is the likely charges against Julian Assange of Wikileaks, which also carries potential First Amendment concerns. Nonetheless, the involvement of Wikileaks in disseminating Russian-obtained federal information specifically to act against the US government (specifically, the security of it's democratic elections) potentially at the direction of a foreign entity (Russia) seems like it supersedes straightforward First Amendment concerns. And that's something they kind of seem to have been doing. I don't know if, for example, Maria Butina's discussed plea deal will reveal information that enlightens us about that side of the operation, but on the "connections to GOP operatives" side of the equation, Roger Stone was apparently in the loop regarding what Wikileaks had and was dropping, and also, maybe, waste of protein Jerome Corsi (known for "Swiftboating" and "Birtherism"--two terms that never should have been entered into the American lexicon) both appear to have had relations with that man, Julian Assange (as had Dana Rohrabacher, with human hairy nevus Charles C. Johnson in his train--who also might be a yet another link to a potential Don Jr perp-walk fantasy, and Nigel Farage, who acted as if he always sometimes dropped by the Ecuadoran embassy for no particular reason).

But of people who Mueller seems to have dead-to-rights from the Trump campaign as having been all up in some kind of skullduggery, it is interesting to me that sentencing is delayed for Rick Gates and there has been an extension in reporting on the status of Paul Manafort's plea agreement. One really cool interpretation of this is that they are both being so very helpful. So. Very. Helpful. To the investigation. Which seems truer when you consider both those things in tandem, but I would guess anything further might be delayed until after Thanksgiving--

And I don't even mind! Because I am not jaded, and am genuinely interested in how all of this shakes out!

Posted by Vixen Strangely at 1:15 AM

" One really cool interpretation of this is that they are both being so very helpful. So. Very. Helpful. To the investigation."

I kind of imagined the opposite: that they haven't, to date, taken full advantage of the opportunity to help the investigation. But I hope you're right.