Nancy Pelosi is a Leader 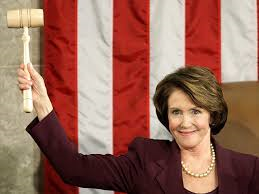 It's very difficult for me to understand the pushback against having Nancy Pelosi as Speaker of the House. She has been an extraordinary leader for the Democratic caucus in the House, as Speaker, and as Minority Leader. She has maintained a discipline and, among other things, ability to count, a sense of what needs to be done and can be done, that has exceeded the leadership of the GOP at times--

And I don't make any mistake about this: this is why she gets demonized as that harpy liberal Commie demon by politicians on the right, and why every Democratic congressional candidate might be tarred with the brush that they are in lockstep with her weird San Francisco hippie values, for a level of political signaling that is pretty much at home in the 1960s. This is their line of reasoning as reactionaries against a progressive vanguard that brings civil rights and down with dumb war and up with the environment and Hooray for Women's rights, and We're here and Queer!

But, because I live here in 2018, I'm not actually seeing a problem here with that thing. Although I was born a few months before Nixon was (strongly) reelected, I was nonetheless born into a timeline where he was wrong and resigned in disgrace and where there have now been a few "Years of the Woman" and Roe Vs. Wade is settled law (hmmm) and certain rights have been secured for LGBT folks, and we aren't almost just about as racist as we all used to be and of course we wouldn't sacrifice the planet we all have to live on to secure a couple thousand coal jobs for a minute in redneck-land just to get Republicans a White House berth for...

Oh, wait, we are still fighting all this shit and Nancy Pelosi has been out here doing this thing and we actually don't have one effective person else to name against her, and if for some reason, the current POTUS and Veep were suddenly, erm, lawfully indisposed, we'd be looking at Madame President Pelosi because of how succession works?

That is my favorite song, and the one I would dance to all night long. I might question whether she was a bit quick to say "no impeachment" in the case of Bush/Cheney, but the cause(es) that might get our current executive branch up the river never initiated with her. They started from shit we actually watched Trump do during his campaign and a case that developed with the oversight of Trump's own DOJ. And these are different times.

I have no doubt that she would be of enormous counsel to any person who did emerge from a leadership tussle if not herself, but why would Democrats want that when she could just be the Speaker, because she never did a thing wrong in that position? For people who just want to see new faces--we have them, but they need to back their faces up first.

I get that people are itching to see younger, newer, more strident people in leadership because it feels like it's time--but it's time for new members to get mentored, learn all the ropes and maneuvers, be ready to learn how to take falls and survive losses. This isn't because we just revere maturity because it is stable, but because we need stability for all these young reps to mature and be better and more capable and get more things done because they know how the system works so that a Democratic House majority can survive beyond two years.

There is a value in understanding a long game. Pelosi has that. Respect it.

Posted by Vixen Strangely at 11:54 PM

Vixen, you and President Trump are in agreement. You both like Nancy Pelosi. I have no opinion, as it is purely an internal Democratic Party matter, and I'm not a Democrat (or a Republican).

Politics makes strange bedfellows. Alexandria Ocasio-Cortez is currently in a fight with Amazon over a matter that would be agreed with by Republicans.

Apparently many states have been throwing tax advantages at Amazon so that Amazon would build in their state. New York in one of the masterpieces of crony capitalism has made tax advantages so irresistible that Amazon decided to partner with them. Ocasio-Cortez wonders why in the heck Amazon should get all those tax advantages from the state when none of the ordinary shops and stores get them. Who died and made Amazon the princess of the ball?

So the state government ordains that amazon get huge advantages because they bring some money into New York, and all the other businesses in the area are ignored.

This is something that Republicans (I'm talking about voting Republicans, not the political establishment) are in agreement with Ocasio-Cortez.

Back to Pelosi for a minute. The general American attitude is that if a person wants something badly enough and they fight hard enough, by jiminy they can get it.

For what it's worth, both the eastern and Western esoteric tradition explain that humans at best have qualified free will. For example, Qabbalists say that life is like playing chess against a grand master – he can checkmate you at any time, but maybe he'll give you a few moves.

Another illustration that they talk about: you're traveling down a river in a canoe and come to a pile of rocks. You can go around to the right or left, drag the canoe over the rocks, and that is an illustration of your free will. However, the river is destined, and there is nothing anyone can do about it. I only mention this because it so definitively flies in the face of the American attitude of fight-til-you-drop.