This is Another Time to Understand Why Some Kneel 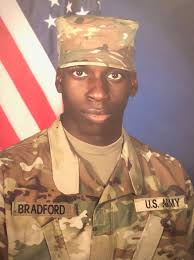 Emantic Fitzgerald Bradford, Jr. was killed, not on a foreign battlefield, but by officers responding to reports of a mall shooting. He was armed, but had not been the person they were looking for. They simply thought he looked like he could have been.

There is a lot of signifying foolishness we have to listen to regarding the use of guns in the US. We hear about the "good guy with a gun" who is supposed to stop a murderous rampage with lightning reflexes and his trusty iron. But we know this can go wrong--this month, security guard Jemel Roberson was exactly that person: the good guy with a gun, who stopped a shooting from becoming worse. And he was fatally shot.

I don't know that what we are looking at with respects to officer-involved fatalities is necessarily explicitly or exclusively racial. I can see cases like that of Richard Black, Jr., a veteran who was shot by police having used his weapon in self defense, as an example of skin tone being no salvation. I understand that police ROE has sometimes become excessively "shoot-first" based because of training like "Bulletproof warrior".

We are not safer, as a society, if the people charged with keeping the peace, keep it by sacrificing others from fear, rather than respecting the call to serve and protect from trained strength. (Which could maybe do with better marksmanship.) And where we accept stunningly weak justifications for officer-involved shootings, we damage the reputation of those who are dutiful. I'm not persuaded that this is a simple issue at all--but I do think we suffer from a romantic, mythic view about guns, and about policing.

We need to explode the myths we have with a cold dose of reality, and that means being real about race and the access to firearms as drivers of violence, and discuss why zero tolerance for racism and less of a romantic view of guns are more stable points of view. I'm not for gun-grabbing, but for changing the idea that firearms are a kind of multitool for making everything or anything right, when other means might suffice.

But when those who currently serve or who are vets here have survived battlefields and yet find violent ends at the hands of our justice officers, we have a situation where the kneeling is for them, not against them (nota bene: it was never against them). Many of our vets are disabled and/or unhoused, which makes them populations that experience violence at greater rates. We can and should do better and expect better on their behalf.
Posted by Vixen Strangely at 1:31 AM