Your Optics Aren't True From Every Angle 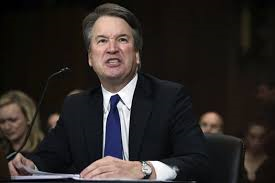 Because I try to understand things that seem wrong to me as if they were puzzles to which I'm missing pieces, I wanted to understand a phenomena that mystified me: folks who sympathized with Brett Kavanaugh. One of my cousins (a fundamentalist, I guess) posted to Facebook something that disturbed me about how clearly, Democrats were accepting money from somebody to destroy this great guy personally because....evil. Clearly, to my fundie cousin, liberals are just evil enough to destroy a guy because internet video of a half minute of one Democrat passing another something that they allege is an envelope of cash. Or maybe it looks like a note. And if it was an envelope of cash, why would it be flush in the middle of some C-Span televised shit?

I don't do politics on Facebook. I'm on the verge of deleting my profile for all the bullshit. But I do have this blog--and for what it is worth, I know the exact white women who might even have a #MeToo story to tell, and are not even privileged, and never will be, and still and all sympathize, not with Dr. Ford, but with the poor, put-upon, beleaguered, President of these United States and the Majority Leader in the Senate and of course, this pro-life dude, with a family and going to church and all that.

It is difficult for me to actually see what they see when they look at Brett Kavanaugh. I see a dude who came off during his response to Dr. Ford's testimony like a guy who had a bad reaction to being named second runner-up in a Bill O'Reilly look-alike contest. He was partisan, and aggressively so. He doubled down on the persona that brought his privileged ass to the very hearing he was at--the anti-left wing culture warrior who tried it with the Clintons. He called the Clintons out by name in his opening statement as if and because it was effective partisan rhetoric, but it in fact had not one thing to do with who he was before Clinton was elected. And his response suggested to me the state of mind he had when he was a jackass teenage son: it was still who he was today--only now bigger and meaner.

Christine Ford nee Blasey isn't a culture warrior--she doesn't come across as political (like I sure as hell do) and she is educated, intentionally, to understand her own mind and its trauma. It deeply affected me that she served as her own expert witness, mentioning how she knows and retains the things that imprinted on her own brain. Kavanaugh unquestionably is a culture warrior. He has been described as a Republican Forest Gump.  He has George W. Bush hanging up the brush he uses to paint the war dead to stump for his Senate votes. Blasey-Ford's family is extremely reticent to speak out. I sympathized with her because I paid attention to the record of Kavanuagh's many petty mistruths: his lie about the drinking age when he was carousing, because it was illegal for those under 21 when Brett was still 17 (a thing he should have known), the commonly-known definitions of terms used in his yearbook (devil's triangle and boofing) which are unsatisfactorily responded to, and the ridiculous "Renata Alumnius" lie, about a girl multiple schoolfriends of his and himself were alleging they basically "scored" with.

To me, a public school kid who seldom drank before HS graduation, who never would have dreamed of Ivy League regardless of whatever scholarship I could have gotten for all the reasons, and who has seriously seen more penises than I ever asked to before I graduated college, yeah I believe Christine. I believe Deborah Ramirez. I believe Julie Swetnick, because this culture has been documented.

But I guess I can also maybe understand why some women don't want this to be true and won't believe it. I know they are wrong (and I have no trouble saying it, but it means nothing in the broader sense of how it politically impacts anything) and they also have no use for those bitches who slandered Trump, also, too. They think these bitches are snitches, and snitches get stitches.  They are exactly out of all fucks for anyone who interferes with the utopia of RW Valhalla.

Not all misbelievers are heaven-hoping Endtimers, tho'. I think some are just hacks. Or probably relatives of Brett Kavanaugh because here is a picture: 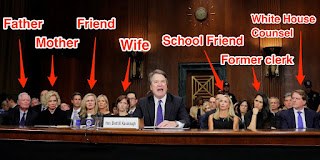 that sets aside the partisan filter for a minute.

There is a picture shared amongst the Left of gape-mouthed Caucasian sisters surrounding an angry Brett. But the picture shows his sympathizers, not detractors. They are allies to him, and their consternation is because he is upset, not because they disagree with the reasons he is upset.

It is probably not true that this debacle has mobilized all the women to vote--it isn't recognized universally as a debacle of a SCOTUS choice and not all women will feel like they need to vote for people who will curtail Trump's crappy SCOTUS and other Federal bench choices.

I wish it were so. But I am resigned it is not. Which is why I encourage all liberals to by all means vote for Dems who will try to block RW bench extremists. But keep in mind, there is another side. There are people who think nothing like you do. They like this kind of partisan signifying. And they are why you always need to vote strategically.
Posted by Vixen Strangely at 2:00 AM

this is just a delaying tactic. he will be seated. judge rapey and judge sexist thomas will be good pals. drinking buddies.

We'll see what happens. My current theory is that the FBI investigation will corroborate some pretty aggressive lying under oath and a couple Republican Senators will use that excuse to vote no.

Of course, that will leave Mitch McConnell the entire lame duck session to push through a non-rapist right wing extremist in the most odiously shameless act of his odious and shameless career...