An Apology Would Be Inappropriate 2 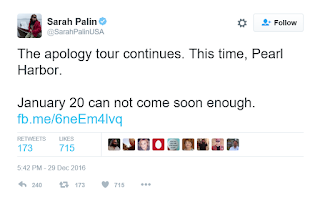 It's sort of hard for me to fathom the kind of steadfastness to a meme that conservatives have for the notion of an "apology tour". Admitting that former US administrations have done things that did not sit well with other nations, or even with populations within the US, is not to apologize for them, but to acknowledge the truths of the broad sweep of history. It is an adult thing that President Obama does in his speeches (which are intended not for a specific, home-based audience, but for the world, which is something the PEOTUS might want to learn is necessary), and an honest thing, but what it is not is a puling offering of apologies for things hat happened outside of the scope of his administration.

So it is even harder for me to see how even the conservative hindtitterati (is that pageview thingie in the upper right hand corner for real even?) or the 2008 GOP VP candidate's Twitter feed, can somehow imply that President Obama is apologizing for Pearl Harbor--which is, um, something the Japanese did and that Japan PM Shinzo Abe came as close as we'll get to an apology for (previous attempts by former Japanese governments having been denied the opportunity to apologize--as we deemed it inappropriate). Which I pointed out when I noted that Obama had not actually apologized for Hiroshima and Nagasaki.(In the comments.)

What seems to actually rankle is the idea that Obama had the audacity to note that "We must resist the urge to demonize those who are different." Because that, even for conservatives, has to be a reference to Trumpism, no?  After all, who else was on about Mexicans being rapists and Muslims being terrorists and African-Americans being violent and unemployed and living in ghettos, right?

Well, if you want to see it that way, okay--he was pointing out that a future Trump administration would probably be all about discrimination and that's really regrettable--thanks, conservatives for pointing it out! Why did you vote for the guy? (Ha ha! Kidding!)  But no, he was pointing out that FDR--our liberal hero, singled out totally innocent Japanese-Americans on the basis of what another nation did, and that that thing was pretty damn unfair. Preconceptions about whole peoples get in the way of treating them fairly. Dunno why it would be read some other way.

Anyway, this is just a reminder that Trump isn't some weird asteroid that crashed into the middle of the GOP and made everyone go all "pod people" in some 1950's B-movie fashion. He is the end result of viewing history through a very smudgy lens.
Posted by Vixen Strangely at 12:11 AM

Admitting past mistakes is obviously a sign of weakness.

I expect our leaders, when they travel to Vietnam or talk about the Tuskegee airmen or Jim Crow, to say, "Hey! Remember when we did this? How about a high five?"

Seriously, I don't understand the problem with acknowledging things that, in retrospect, we should all be able to admit were mistakes.