No, Really. Shut up. 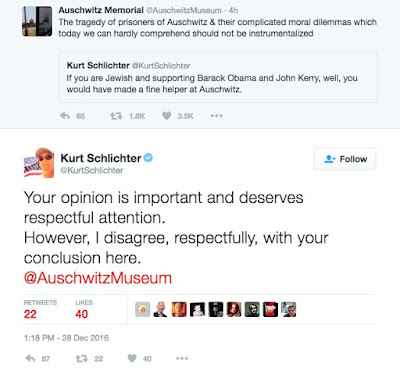 I'm not pretending that I have all the answers but I will say this--not all opinions are created equal. You could have some flaming hot takes on a thing based on an ideology you inherited that you haven't really thought the hell out, or you could be a person who regularly confronts the actual human toll of determining what some definition of "others" really "ought" to do with themselves, and the situation they "ought to consider themselves in" to sort themselves out properly (not like a threat, ha ha!?) just as a very real and remembered historical tragedy.

Just idly wanting to call Jews who support Obama "Kapos" as if implying that the current American presidential administration is exactly like a concentration camp committing genocide, is not merely disgustingly inflammatory, but cheapens the idea of genocide. It's clearly intentionally inflammatory. Schlichter doesn't see any problem with equating a person like Bernie Sanders with Pol Pot.  Really? Wanting a living wage and health care for all is exactly like exterminating numerous people for political reasons? When we talk about Donald Trump's love of dictators, which is a real thing, are we even bringing up genocide? Or are we trying to demonstrate that Trump doesn't even know what he's about? That he wants to approach dissenters with force because he doesn't even have a handle on how to subdue them with informed rhetoric?

I don't think Schlichter knows what he's about in alleging that folks at the Auschwitz Museum don't understand what genocide is. I'm just spending a minute on him here because being that badly wrong needs to be recognized. Israel is vulnerable to terror, and exposed--in part especially in the settlement regions. Failure to recognize this danger, and the peril of any thinking that antagonism is necessarily the best strategy in addressing these threats--is if one might pardon my assumptions, a recipe for violence. Trying to mitigate the situation to remove most potential for provocation is diplomacy. Doing otherwise is setting a stage for war. And avoidable deaths. This is a valid criticism many Israel supporters have against RW hardliners like Netanyahu.

But I doubt he's addressing this rationally, but to be exploitative. And his response to the Auschwitz Museum is just more exploitation. In other words, doing exactly the thing they pegged him with.

Posted by Vixen Strangely at 12:35 AM