Rest in the Force 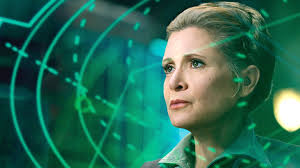 Carrie Fisher, one unbelievably witty, talented, and truly genuine person, is dead at age 60. It seems cruel that she was stricken with her cardiac event four days ago, and was hospitalized and even in stable condition before she had passed, giving her fans hope that she would rally. But that didn't happen--I only hope that she was able to know the outpouring of well-wishes people had for her before she was gone.

Best known for her role as Princess (later, General) Leia Organa, leader of the rebellion against the Dark Side-led Empire in George Lucas' cinematic epic Star Wars series, she sort of was one of my feminist heroes. She portrayed a tough, sarcastic, brave Princess who didn't always need saving--and it was great to know that the actress behind that great character was a bit like that, too. Feisty. Honest. And a fighter for a cause. Her openness about her mental health and addiction behavior helped to lessen the stigma of those conditions. She was keenly aware that she wasn't perfect in a culture that tries to fake perfection, and she was knowing, wise, and humorous about it in her writing.

Star Wars was the first film I saw in a theater, and is pretty much a touchstone for many in my generation. (It still seems a little shocking to me when I come across a forty or thirty-something who has somehow not seen any Star Wars movies. How?) I think, over the arc of that series of movies, Leia seems to be as fully-realized as a character gets--and it is in no small part because Fisher herself deeply understood how scene writing and dialogue worked (and was well known as a script doctor giving often uncredited assistance to so many projects).

It's probably purely selfish of me that I'm relieved she had finished shooting for Star Wars Episode VIII, but feel so deprived, not just for myself but all her fans, of all the interesting things she still would have had in her. Her portrayal of the older, sadder, but wise General Organa showed that (despite some of the jackassery people had to say about the weird fact that actresses actually age) the character, and the actress, had not so much aged as ripened. How I wish she had more time with us.

I don't have any ideas about what the cosmos contains, but sort of want to think she is with the Force.

Posted by Vixen Strangely at 12:09 AM