In Russia, Computer Hacks You! 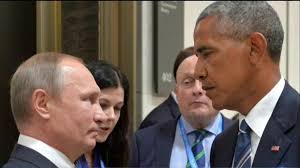 So, it had to come to pass that the US would no longer pretend that the DNC hack and so forth wasn't identifiably a Russian dezinformatsiya op and would call the actual blackguards out. They are making several Russian operatives persona non grata and dismantling their covers--bye bye spies! The hackers looted the DNC and Podesta but for what it's worth, they didn't loot our ability to find them out and call them out.

What I want noted is that this hack had to do with influencing voters based on biased storylines about one candidate--Hillary Clinton, to a degree to which GOP candidate Trump was not similarly subjected. It wasn't about hacking the actual polling places or election machinery--Greg Palast is a longtime skeptic regarding the accuracy of our elections, but he notes that the problem goes back to who even gets to go to the polls, and who gets to count. There are major systemic problems with our bid at actually achieving full registration of eligible citizens and participation of same. This is different than any idea that the voting machines themselves were necessarily compromised. It's the voting public that was.

But when the issue is brought up to PEOTUS Trump himself, the whargarble that comes out is a little troubling:

“I think we ought to get on with our lives,” he said. “I think that computers have complicated lives very greatly. The whole age of computer has made it where nobody knows exactly what is going on. We have speed, we have a lot of other things, but I’m not sure we have the kind, the security we need.”

Mr. Trump took questions Wednesday from a handful of reporters as Don King, the sports promoter and a longtime friend, stood next to him. He has not held a formal news conference since July, though he promised on Wednesday to hold one in early January.

"We have speed"? Not a comfort to those of us who expected that a little meth made the merrier re: his dry mouth and sniffling in the debates. But his comment that computers made things more complicated, from a guy whose spell check never prevents embarrassment on Twitter? Yes, I think I understand your idea of "complication". He doesn't really understand what "the cyber" is all about.

I sort of feel sympathetic to the idea that at some level, Trump lives in anxiety that he was elected POTUS as a fluke and wants to deny the Russian hack because he wasn't literally in the loop. But I look at who was on his crew, like Carter Page and Paul Manafort, and I feel like if he was up to the job, he would have known. Did Trump not realize he was surrounded by operatives of foreign governments? Did he not know what was happening in and about his campaign, or why WikiLeaks was so helpful to him?

But that sympathy only goes so far before it turns to concern--he doesn't care that a foreign power used information it stole to interfere in our democratic process? Or--he doesn't care because it benefited him?  He says we should "get on with our lives" and just ignore the hack? And his paid liars also just go out and lie about this. (Of course, Russia would never have an intelligence op right here in the US. No, really. She said that.)

It's shameful.
Posted by Vixen Strangely at 1:22 AM