An Apology Would Be Inappropriate 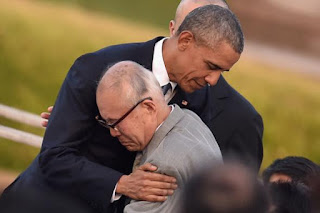 The image of President Obama, the first US president to visit the site where the nuclear age was unleashed, embracing the survivor of the Hiroshima bombing, marks a moment of an extraordinary acknowledgement of the enormity of nuclear weapons' use--without constituting an apology.

What president now living could apologize for an act which caused such casualties? How would we or could we place such an event in its historical perspective and re-litigate why it ever took place? It is not possible to entirely do so, but the correct approach is what Obama has done--acknowledge what happened, and point to a task to prevent the use of these devastating weapons from ever happening again.

This does not stop his insane detractors on the right, of course, who ignorantly decry an "apology tour" that has not ever happened in the course of Obama's presidency. What such ignorami reveal is a disgraceful inability to respect the idea of soft or even smart power--a total lack of appreciation for the very idea of diplomacy at all, or an understanding that the place of the US as first among nations and its standing and respect must flow from our adherence to some standard of decency. That we ought not torture, or detain without charge, or go to war without valid interest, or commit atrocities abroad should be a matter of our highest interest--on which our national reputation rests. That we reject nuclear attack or the idea of "total war" is a matter of principle.

It would be great if both parties understood this intimately and did not play the unattractive game of calling out our President as somehow being Un-American for trying to do what is fundamentally decent. But this is not how it is. This is not how it is at all.

The current GOP Presidential candidate is in favor of nuclear proliferation and torture, and has the full support of his party, with only some tepid reservations expressed by useless dupes who think the real problem with their guy is his "tone".

This image above is what America should be--big enough and strong enough to embrace the history we have made. I am sorry, myself--sorry that so many Americans are so very, very small.

Posted by Vixen Strangely at 12:40 AM

This would be somewhat more convincing if the Dear Leader weren't also committed to spending a Trillion dollars to modernize the US's nuclear arsenal.

Hi Vixen, as you point out Eisenhower, a Republican, did not think it was necessary. Truman, a Democrat, did. So maybe we should blame Democrats. :-)

Seriously though, this business of reevaluating history comes up fairly often. There are people who still re-fight the War between the States.

I guess my irrelevant thought about it is that it's appropriate for an American president to acknowledge America's role with nuclear weapons if at the same time the Japanese acknowledge that maybe taking an entire armada an mercilessly slaying untold numbers of civilians and military personnel at Pearl Harbor wasn't the greatest idea in the world. I've had very good Japanese friends, and we've had conversations about all this. Certainly nothing is going to change those events today.

The Tibetans have a blessing: “May you be reborn in a country where the dharma is taught.” From the Buddhist perspective this is the only vehicle that will provide an exit from the vicissitudes of the material world. Actually Buddhists were a tad short-sighted, because many other traditions asserted the same thing.

In the Qaballah you no doubt have heard of Tikkun olam which roughly translates into “fixing the world.” And there is a variety of procedures one goes through to “fix” the world.

An important element is less known, tikkun hanefesh, which in a very simple translation means “repair of the self,”

Here we run into a conundrum understood throughout the wisdom traditions. One is not qualified to fix the world unless one has first fixed themselves. One Eastern master said that if you want the forest to be green, every individual tree has to be green.

Those who have yet to fix themselves simply have no ability to evaluate the requirements of repairing the world, because they are looking at life from a broken perspective. Naturally, this means most of us are not capable of understanding or dealing with repairing a world as broken as ours is.

This is why the world is simply an endless revolution of all the same factors creating the multitude of vicissitudes we continue to encounter in the temporal milieu, at least in the Kali Yuga. So from the point of view of the wisdom traditions, the thing to do is to set one's sights in the direction of enlightenment (there are many different vehicles of approach). Until that happens one will have delusional impulses from the id, from complexes, from fixations, and a host of other psychological abnormalities.

So the good news is that there is a way to eventually have enough grasp to fix the world; the difficult news is that it is going to take a lot of attention to eliminating a lot of one's personal foibles and psychological maladaptations that make it impossible to see the world from an enlightened perspective. The answer is to fix yourself. The Bible says, “Greater is he who controls himself than he who takes a city by force.” Today we have a lot of broken people trying to fix a broken world. What could possibly go wrong with that?

With respects to the Japanese, they live in the same twilight place in history after enormities that the US does:

Where things are simultaneously remembered, apologized for, and forgotten, never to be spoken of again. The apology of Japan regarding Pearl Harbor was promptly admitted by the Emperor Hirohito, but rebuffed by MacArthur. I have an idea that like the misunderstanding that westerners often have regarding karma, the impression of the value of apology and the degree to which it offers a position of strength or weakness differs to Western and Eastern eyes. The Japanese surrendered and the US to this day has multiple military bases in Japan. To be clear--they aren't tempted to try it again, anyway. But I find it hard to hold people today at cause for things that happened before my parents were born. Me and the Japenese--we're straight.

On the eve of Memorial Day, both of these comments remind me of the degree to which the foreign policy we find ourselves with is an inheritance. From Eisenhower (who had considerable reservations about the necessity for the bombing of Hiroshima and Nagasaki) to Obama--every president of the US has inherited a world in which nukes have played a role. The Soviet Union exploded its first bomb in 1949. That was the year my mother was born. China's first nuculear test was in 1964--just three years after President Obama was born. Many of us living now have never lived in a world where the threat of nuclear war did not exist. India and Pakistan developed nukes within the last thirty years.

Every president since Truman both had the ability to drop nukes, and the ability to refrain from doing so. They refrained even while the arsenal of thUS was expanded, most notably during the peak of the "Arms Race" between 1980 and 1990--where one stockpiler-the USSR, had a dramatic change of government.

A standing and aging arsenal exists in the US--and, news reports have recently reiterated what many of us know--the systems that still run the nuclear program are so antiquated that 8" floppies disks are used. Our now 70 decade international discussion with multiple countries has not resulted in multilateral disarmament, but has left us with the risk that less stable regimes than the late 1980's USSR--or Pakistan--such as North Korea (I'm not saying Iran has any program--but what if hardliners got real popular tomorrow and they were back in business? Or consider where the threat from Iraq was circa 1990?) Or consider Russia just invading Ukraine like it was no big. What we are in is a Chinese finger-trap. Pulling out puts the squeeze on. Getting our shit together loosens the trap. But we are all armed to the teeth and unable to get our shit together.

So we put $1 trillion into making sure the weapons we hope to never use, as preceding generations managed not to for the most part, are shiny and new in a world where our real fears should be food scarcity and environmental disruption.

You got me, Unknown--Obama isn't any better than the preceding lot. He has failed to be worse and my standards are so low I think that's dandy. Feel free to enjoy smug tidings at my failure to prove he solved a puzzle the whole human race hasn't sorted us out of yet. I was only approving of his being human. But no really. Obviously I suffer from blind hero worship instead of a recognition that we have people walking around trying to be president or senator or whatever who aren't even as cool as human or decent or ready to let the past be past enough. Clearly he was supposed to beat all our old weapons into organic farm equipment and put all the other nuclear-capable nations on alert that they should do the same or we'd be quite cross. Then end racism and misogyny and convert us to socialism for an encore?