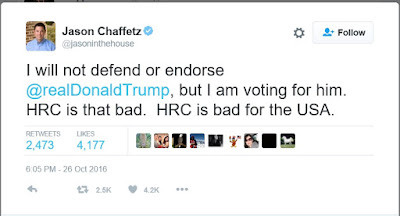 For a variety of reasons, I went with the screen-cap and not the embed on this one. Rep. Jason Chaffetz, once a potential challenger for Speaker of the House (although OMG--what if something were to befall Golden Boy Paul Ryan? Who knows?) and applicant for the Secret Service, who is so capable of handling classified information, just a matter of weeks after rescinding his endorsement of Trump,  and having also in the past been critical of Trump's failure to "open (his) kimono" with respects to tax returns, has decided that it's probably really dodgy to go on as a GOP Congressman and not 1) Support the party's nominee, 2) allow the possibility of seeming to support the Democratic nominee, who the fix has long been in to start trying to impeach from Day One of her Presidency, and 3) he wants to justify his role in being "that guy". The guy who is trying to take down the bad lady.

Now, this isn't just to single out poor Rep. Chaffetz. This is to talk about what our current political situation is: One side, in this case, the GOP, is demonizing and delegitimizing the apparent Democratic winners in advance. The other side--my side, has got to figure out a way to stop this vicious cycle (since they don't seem to show any inclination to stop) of making Democrats pay for our successes.

Now, my first choice is a wave election where we get on-board with voting out all the R.'s wherever we feasibly can--I think this year the Senate could be in reach if Clinton is performing where the polls say she is. The House is probably not reachable this election--so we need to already be thinking about the 2018 mid-term. That said, there needs to be a vocal strategy about priorities--lay it out on the table: Do we have time for fake-scandal bullshittery that spends taxpayer money on free attention for congressional grandstanders, or do we think addressing the real problems facing this country's citizens are worth taking seriously?

This two-step is being done by several red-state politicians who can't disturb where the primaries told them their natural voter base leans. Or so they think. But that base they are looking at is not set in concrete. I'm a little confident about the Clinton win, and if I'm right, the DNC needs to treat Trump like an albatross. A stinking albatross. And no one gets to have it drop from their neck until they appreciate the little things that might actually result in something called "good governance". Like--not demonizing. Not holding show-trials for b.s. reasons. And listening to one another and crossing the stupid aisle. Year after year we are told this is what a lot of Americans would like to see, and year after year, they get more bullshit.

So let's get Chaffetz the hell out of there for his current flexible principles, or at least stay on attention with him for future planned partisan stupidity. But pay attention to your own possible local Chaffetz-that guy (like my Senator Pat Toomey) who can't even put who he endorses or will vote for on the record. Lots of people this year are seeing the presidential vote as very much a moral choice--I am not opposed to this way of thinking.
Posted by Vixen Strangely at 12:59 AM