Musket a Better Idea About How Civics Works 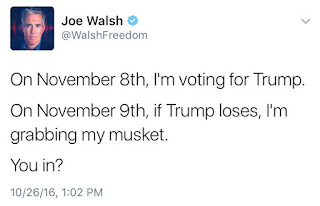 So there is a possibility that "grabbing his musket" is Joe's euphemism for slapping the captain or bopping the bishop, but I think that maybe Walsh--who was voted out of his office because he is really only good for being a bad example--might have a point.  Why wouldn't the results of the election hew to what Joe Walsh has personally observed? Why would his own personal sampling of the potential electorate seem so radically different from the one touted by the "lamestream media"?

It's a question that I think is pretty interesting: take me, personally, as your specifically "not Joe Walsh" example. I live in Philadelphia, work in Trenton, am personally culturally Catholic but confessedly agnostic, and queer in theory if not very lately in practice.  My individual sampling is going to represent a more dense population and a more diverse demographics than the people Joe Walsh is meeting. My personal reflections based on my in-group skews very highly Clinton. There is little Trump-support in my in-person or work-related or broader familial/Facebook-y cohort--and to the extent that there was one relative who just posted some slop from conspiracy sites regarding why the Trump accusers were specifically and aggregately BS, I just needed to not have that in my face for all the reasons. (Sorry cuz!)

My sample has more diversity and my media choices are somewhat more reality-centered. I think former Rep,. Walsh probably is relying on FOX, having whittled down his notion of what acceptable journalism looks like. So a Clinton win to him, might conceivably look very wrong. Maybe even musket grabbingly so. While I am relatively certain the deal with Clinton is down, and we are just negotiating how awesome her WH sauce will be, I wonder.

But "grabbing the musket"? That is not how we settle our scores in a free and fair democracy.

Posted by Vixen Strangely at 2:14 AM

If he really wants to overthrow the government, he might want to update his choice in weaponry.

I'm not sure how well his musket will stand up against drone strikes, automatic weapons, and those SWAT things that emit a high-pitched noise that basically leaves you helpless.