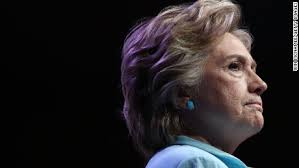 Sometimes, I just genuinely miss Bartcop. He'd have had the damn media whores and their prim centrist both-sides narrative nailed to the wall and hammered them mightily. Well--not that they feel the effect from us bloggers out here, anyway, but I got whiskey in the jar (not Chinaco in a shotglass) and I feel like these damn, dumb, half-assed, milk-fed, lot-raised, veal-pen excuses for journalists have a problem at this point--and yes, it's them, and no, I don't feel like moderating my tone about it, because this is the shit that the media has been doing with respects to Hillary Clinton for practically her whole public career.

They have a narrative. She's ambitious. She's got a "credibility issue". She seems "moderated". So when Hillary Clinton opens up the floor to the press at the National Association of Black Journalists and National Association of Hispanic Journalists’ Joint Conference in Washington, D.C, she of course gets mired in a question about what Bernie Sanders called "her damn emails!" And the mainstream media seems to want to say--she's just up and lying about those emails. Gee, this is so just as bad as Trump thinking hostages getting off a plane in Geneva is a plane offloading pallets of cash in Tehran. Do you think I lie?

It's already been said by Tommy Christopher at Mediaite, but, sometimes the fact checkers are wrong. Awarding "Pinocchios" is, itself, a bit of an opinion, not an actual checking of fact, and how much of a fact you want to check sometimes limits how honest you find an answer to be. Maybe the working journalists who watched the House grill Comey over his decision that there was no good case for prosecution kind of missed that he was trying, the entire while, to preserve the idea that there might be a little bit of a "there" there. In other words, if her story was different from his insinuations--she was on her own disproving a case he himself said no sane prosecutor would bring. (Somerby does the lifting for how that little trick works. )

All I know is, the people who persist in calling Clinton a liar certainly weren't seeing the same House hearing I did. Because it was clear that the three (?!3?!) classified emails that were sort of marked weren't marked properly. Her statements to the FBI were found to be truthful. And, welp! That's it. Her server wasn't hacked that anyone can tell. And that's that.

I know that's boring. I know that means we might have to look at her policy proposals (she has many) and what she would probably do in office. I know this is as close as the media gets to pretending there's balance because: Well, we did some negative stories on Trump--hey look! Here's some stuff that's negative about Clinton!

But sometimes that's what journalism is--boring. You sometimes have to let the facts lead and fuck your fucking narrative. She can't go back in time and not have set up a separate email server. We can't go back in time and make the GOP candidate somebody else. You don't have a horserace to report on--you have a horse and a horse's ass. Deal with it!
Posted by Vixen Strangely at 1:56 AM

Sadly, you're wasting your time. At this point, the Clinton narrative isn't going to change, at least until they're reporting on President Clinton as opposed to Candidate Clinton.

But to be fair, there IS a tiny bit of there there. She violated IT Policy. We get it - nobody likes the data retention policies in an era of the Freedom of Information Act. That's why here predecessors violated the same IT policy. But the lesson here - especially if you're a Clinton - is to not give them an opening - ANY opening. If she had done everything in an identical fashion, but had done them on a State Department dot gov server, none of this would ever have even come up.

The good news is that this election is entirely dominated by negative partisanship. The voters aren't in general voting FOR, they're voting AGAINST. And many, many more of us are voting against Donald Trump. Which will give us a perfectly effective President, a likely (narrow) Senate majority and a major constitutional crisis over the Supreme Court. It will also give the Republicans a chance to re-tool their message to one of white nationalism, social conservatism and authoritarian governance...

Hi Vixen, I appreciate how frustrating this can be to you. And I understand the wisdom of Mikey's comment.

You realize that Hillary is my second choice for president. Naturally, I prefer Trump, but if he lost I wouldn't want the Libertarians or some Bernie candidate or the Green Party or the Socialists. I would want Hillary. So while Hillary is by no means my preferred candidate, she is in second place.

Most people say I never have anything good to say about candidates. This is not true. I find both Donald's and Hillary's haircuts to be remarkable, and it must be pretty expensive to get a haircut that is so flattering.

I think it is relevant to bear in mind that Hillary arrived at this campaign with a reputation already made by a lifetime in politics.

People my age are roughly the same age as the Clintons, and as a consequence we have been there throughout scandal after scandal, deception after deception, so those of us who are older voters really have deep lessons about the Clintons and truth.

Naturally, younger voters would be less knowledgeable about those early days, but Secretary Clinton had made her reputation starting decades ago.

No one my age is surprised about any of this. And it is unfortunate that the Clintons could not simply outlive everyone for a hundred years and start over fresh.

I had the unusual experience on Twitter of linking to a positive story about Clinton's accomplishments to a skeptical (I presume younger) Sanders person, whose response was "Don't try to paint her as a saint!"

Good grief! I pointed out she gets stuff done--as you say, Formerly Amherst--even if she isn't a person's first choice, she at least knows what she's doing. No one is going to say she's a saint or hasn't made mistakes--she has! But it's the consequence of being in politics a long while, and I just don't care for the double standard where she has to be perfect when I don't think other politicians have been held to that. Also--I think saints would make terrible politicians. A lot of them are martyrs and show a hard-headed inability to deal with present realities over matters of inconvenient conscience.

I think the biggest objection a lot of liberal-leaning people to Hillary Clinton is that they just don't want to go through the scandal-wringer again--when Joe Biden made his famous faux pas (that he was obviously more than forgiven for) of referring to Barack Obama as a candidate as "clean"--I totally got it. The guy was young enough in politics that he had just made his bones without piling up a list of major beefs that would come back to bite him--and he had the prudence to stay that way. If anything, his control of his media persona and sense of doing things in a correct and unobjectionable way strikes more than a few on the left as a trifle obsessive.

Mikey's scenario is probably right--Dems don't have the numbers on our side to turn the House, we'll maybe just turn the Senate and based on polls right this minute, it looks pretty clear like Clinton gets the White House. But if McConnell and GOP leadership continue on the same "reject everything" gridlock mindset--her first term is going to be way fraught. I can't see them holding the line on no SCOTUS hearings though--my best hope is that changing demographics and favorable voting rights cases send a message to the left grassroots that if you really want change, you better vote with your ballots every bit as much as you vote with your feet, your dollars, your online petitions.