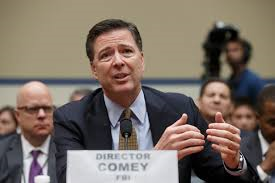 On Tuesday, FBI Director James Comey almost seemed to try to do Republicans "a solid" by chastising former Secretary of State Hillary Clinton's email practices as reckless. He suggested that her private server could have been hacked, and that there actually was material designated as classified on her server, which she said didn't even happen. That was some b-roll for future Clinton attack ads for sure, right? Former DOJ spokesperson Matthew Miller explains how what Comey said was kind of out of bounds:

In several instances, Comey made assertions that are outside the authority of the FBI. He inserted himself into a long-standing bureaucratic battle between the State Department and the FBI and intelligence agencies, making claims about classification practices at the State Department that do not fall under his jurisdiction. He raised the possibility of administrative sanctions that could be taken, another decision that is not his to make — any such sanctions, if appropriate, would be decided by the State Department, not the director of the FBI.

In other words, he talked down about what the department head at State had done, but since he didn't have any damn thing he could use in a court of law, he should have kept his opinion to himself. But you leave it to House Republicans to get foolish about the pony they find under their July Christmas tree.

They had to go demanding a better pony, because they wanted indictments and stuff! Now! And of course they fupped it uck. Kevin Drum points out how Comey got placed in the wonderful position of defending Clinton against stupid RW conspiracy theories because they just aren't true--to sum up--did she lie: no. Did Gen Petraeus get in trouble for far less--oh heck no, he was hiding classified material in his attic insulation and passing it to his goomah and shit like that. Was there really classified emails--well, no they were probably not labeled right. Did Guccifer really breach her system--no that didn't really happen, he was full of shit.

So, they basically inoculated Hillary Clinton by getting the really dumb conspiracy theory stuff out in the open to be shot down right away, instead of letting it fester on RW sites as it would have done. Now that the FBI investigation is wrapped up, the State Department is looking into what should happen with its current employees to determine what penalties, if any, need to be made, but look--Clinton is out at state, she was the SOS, and her boss, Obama, is enthusiastically supporting her to replace him. So?

They got nuffin'. And they earned it. They wanted the FBI investigation to recommend charges because they believed so hard, you guys.

That and a dollar doesn't get you a decent cup of coffee anymore. Also, Speaker of the House Paul Ryan is a dumb hack and no better than he ought to be, and probably a damn sight worse.

Posted by Vixen Strangely at 12:11 AM