President Obama Has An Economic Legacy 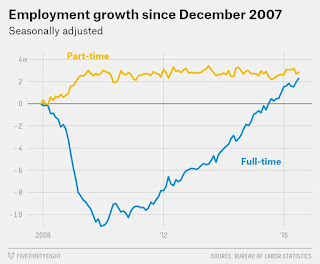 One of the things that bothers me about Obama criticism is that the dismissal of what Barack Obama has done as president seems to rest on an idea that one president, in one or two terms, can unfuxxor a Great Recession, while trying to win assorted foreign conflicts aginst terrorism, and get nothing but good press and approbation along the way. Despite opposition to things he might have been able to do to help more. Although the success of the recovery isn't an absolute success--many good things have happened. The rebound of full-time employment, while part-time jobs stayed stable--is part of the picture.  Full-time jobs are awesomesauce, they have bennies and security--and that they are the jobs gained in the economy as opposed to a boost in part-time employment is significant--but again--that's just part of the picture--I want to tell a whole story in numbers.

So, the thing I want to specifically address in this post is whether the Obama economy is a problem for Hillary Clinton as a kind of beneficiary of some sort of economic mojo--or whether she has a lot of positive opinion for Democratic economic performance to work with.
Based on the latest jobs report--she should have a relatively easy job explaining that Democrats deliver on jobs. In fact, wages are even beginning to rise, making this a market where workers have some power. 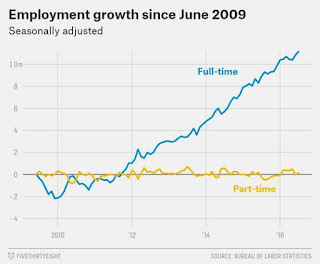 Part of the legacy she is dealing with is Obamacare--as the previous Clinton Administration spokesperson regarding the attempt to get universal healthcare, it's expected she has opinions galore regarding the impact of any healthcare legislation. But the most debunkable of all anti-ACA claims is the one where supposedly, Obamacare hurts jobs.  If the economy has consistently added jobs, which it has, this is patently untrue. The job growth has been largely in full-time jobs--which means jobs where access to benefits is expected. 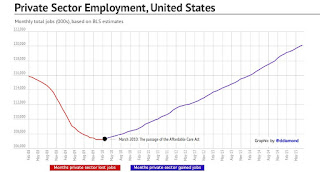 What also needs to be pointed out is that Obama was able to grow the economy without conspicuously growing the government. The job growth that we have experienced has been in the private sector. There are very good reasons to trust Democrats with your private sector job growth--despite the reputation for "big government" they have a good rep when it comes to job creation.

Obama has also been good for the stock market. 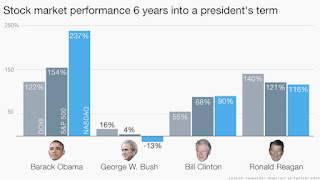 It kind of looks like there's a pretty good reason for Obama to have favorable polls over 50% based on a pretty damn good recovery--even though we can't unequivocally state it's a total success.  But it is pretty damn good, and not something I would want Trump fucking with. He bankrupted six times and lost in the casino business with house money. Obama just gave seven+ years of excellence that lets us know who is really smart with money on an international scale. And I think I know who learned from that example--and who has not.
Posted by Vixen Strangely at 12:35 AM