Marco Rubio Should Keep Out of This 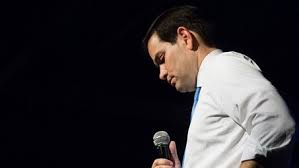 One of the most disturbing things the media tried to do with Marco Rubio was try to portray him as someone who was less radical and incendiary than a loud-mouth like Trump. Rubio's professed beliefs on social issues are extremely retrograde--take his appearance at a homophobe hootenanny.  The guy claimed that the mass shooting at an Orlando LGBT nightclub reminded him of his calling to public service--and at the first opportunity, he's back on the side of oppressing people who happen to be gay, and he won't do anything about guns, either, and oh, he's basically fish-titty useless on understanding the causes and concerns of Islamic radicalism, because he doesn't know the difference between Shia Iran and Sunni Wahhabist ISIS. But you know what he never needs to insert himself in--
Family planning. Especially when it comes to his recent empathy and good sense-lacking commentary on what Zika-infected women should do regarding their pregnancies.
The short of the long is, because he's so very, very pro-life, he doesn't think women should have the right to determine whether they can terminate a pregnancy that may result in a severely impaired child, that may be physically onerous on them (because of being infected) and may prove highly costly to that woman, her family, and their community. He lets his four-letter fig leaf, in other words--"life"--trump everything else that might be meaningful in this discussion. He would prefer he take the power to choose out of the hands of women, leaving them with children whose lives are extraordinarily burdened, and inflicting suffering on families as a result.
I find it less than amusing to note, that he uses the language of pseudoscience: "pain-capable" regarding fetuses, and yet ignorantly and with all paternalism, ignores the actual real pain that is experienced by the post-born people who live in the actual world, and who, if one were the baby in question, endure such symptoms as vision and hearing loss, severely delayed development, seizures, and a host of other ills. And, if one were the parents, a lifetime controlled by the need to provide for a severely impaired infant--who would cease to be an infant in time and would become, at some point, an adult, with all these impairments, with elderly parents who might not outlive that child's needs.
It's none of his fucking pro-life concern whether these people seek out a legal medical procedure to avoid that enduring pain. It's brutality on his part to suppose that his moral qualms supplant the understanding of other people about what they need to do for the better future of their families. He is mind-blind to the struggles they will face, in the certainty of his own internal righteousness.
I hope he loses his damn Senate seat, and that the private sector is as cold to him as as the moral freezer he keeps his regard for us human meat-puppets in.
Posted by Vixen Strangely at 12:39 AM

Marco wants more brain-dead voters, that's all. (Many young adults want to have children and these MoFoKo_s want to stiff them again and gaina. Grrrrr"