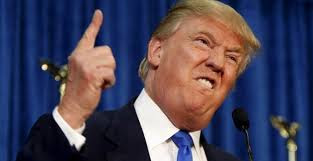 So, how quickly after any event should someone decide to politicize it as if spinning an event to one's own purposes was actually the best words you could use on one of the hugest tests of your stupid billionaire bucket-list candidacy for higher office?

Oh, wait, I'm being facetious again. What I'm basically saying out loud is that if the first thing you think to do when a tragedy happens is blame terrorists (like no duh, everyone thinks this is a possibility now and even has a list of suspects, so don't get too self-congratulatory, eh?) and act like no one else is as smart as you are, to go ahead and assign blame when it could for all you know when no investigation has turned up jack or squat yet be a mechanical problem, assume no one else is on it and don't even grant a momentary thought to the families and friends of the victims, well, that is a refreshing difference, isn't it?

As in--no, this is a sign of a not-at-all refreshing political opportunism, because no sooner did Trump have it in his mind that this was so entirely terrorism, he was blaming Hillary Clinton for not knowing it was going to happen (like she gets email alerts from terrorist networks or something) and not knowing who did it. Like he does know?  Or ever had any clue about foreign policy ever at any time?

So when Donald Trump wants to make any kind of claim about who might be qualified--in answer to Hillary Clinton stating he very much isn't?  He might want to start by acting as if he even was qualified by knowing when to shut his mouth. Tempus loquendi, tempus tacendi.

Posted by Vixen Strangely at 12:30 AM

Hi Vixen, by now you will have seen that Hillary is more or less in agreement with Trump. She publicly has admitted that probably it's terrorism, although she did not directly accuse Islamic radicalism by name. She said that it could be ISIS, but there are a number of different groups.

I think what we have to bear in mind is that both candidates are surrounded by military and intelligence advisors. They both receive regular intelligence briefings. As a consequence we never really know how much they're holding back. If something is being spoken of openly, you have to assume that it is partly calculated for effect rather than the honest dissemination of knowledge into the public sphere. When you go public you automatically let your enemies know what you are up to. Really, public knowledge is somewhat untrustworthy because of this fact.

Because our policy was to withdraw our forces, radical Islam has spread to dozens of different countries. Had we contained and destroyed these enemies, the problem would not have become so widespread. Now the policy has been to send 50 or 150 special forces operators into countries covertly to try and restrain their attempt to become dominant. We need to forcefully destroy all these terrorists attempting to advance their front and deny them a foothold in these other countries.

Had we kept the problem contained, it would have been simpler to deal with. Now we will have to provide a large escalation of forces to defeat a much more complex, malevolent hydra.

I think there is a pretty meaningful difference in the response between Trump and Clinton though, and it strikes me as significant:

Trump goes out of his way to say that if anyone says it is not terrorism, they are 100% wrong. Clinton says it seems likely that it could be (as Egypt has indicated) but leaves open that an investigation will have to determine that for sure. That little difference is the divide between appealing to a gung-ho ideology about "destroying terrorists" and having the PR sense to not make public declarations before knowing anything so as not to come away looking like a smacked ass.

The odd thing about the claim that the US has retreated militarily is both the degree to which is isn't strictly true (the US leads the air campaign in Iraq and Syria, and a recent US airstrike took place in Pakistan--where we seem to operate when we like--took out Mullah Omar's successor, Mullah Mansoor). And yet, many lefties--a lot of them pro-Sanders, would say this is entirely too much. They point to foreign occupation and drone-strikes as being used as recruitment tools for militant groups like al-Quaida and Daesh. They would say we just haven't gone far enough to limit the impression of our imperial monstrousness abroad and that this is what feeds in to our becoming a target for terror.

They have a point, after all. Osama Bin Laden was just jake with the US using him to muck about in Afghanistan during the Cold War, but drew the line at the first Gulf War. There's just no pleasing some people I guess. Lots of the Daesh guys are just displaced former Iraq Army. The militancy that turned them into al-Qaida's nastier baby brother might not have been except for the notion that War on Terror necessarily meant the conventional kind of war we all saw in John Wayne films.

Anything can become radicalized. Islam, Catholicism, Communism. Can't destroy ideas or even prevent people from taking up certain tactics, except by making other, less militant ones available. I understand that Clinton and Trump are both getting intelligence briefings, but I also understand that you can give the Principia Mathematica to Stephen Hawking and a cow, but only one will thoroughly digest it--and produce bullshit.