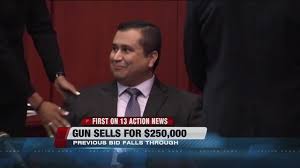 I do not know or actually care what George Zimmerman's current financial or employment situation is, but I have to suppose it isn't especially great since the notoriety of killing a 17-year old followed by having his personal history of aggravated hotheaded shitbaggery aired to the public isn't really great to have as the unspoken part of one's resume, and legal fees are a biatch--amirite?

Still and all, it must trouble him to think that he is parting with this particular symbol of his ability to crash into a moral dilemma, fuck it up, and walk away physically unscathed, because this particular shooting iron bagged the most unusual prey--didn't it? And even amusing oneself by rubbing salt in the wounds of the young man's parents probably isn't quite the same as having that little fetish item hanging around where he could feel the kind of security only a gun lets you have. The security to get out of your truck and confront a suspect-looking black kid in a hoodie because you know you got Mr. Problem-Solver on you. The kind of security that, if Mr. Zimmerman did not have it, he would not be in this situation--and his victim would possibly be in college? Or graduating this year?

Someone else is going to be dropping hot spunk on Mr. Problem-Solver thinking about all the problems he would like to get rid of if he was just that kind of guy (but he has, we should assume, $250K and isn't that guy), and as for ol' George, still older and deeper in debt? There will be other guns. They don't ask questions, they just respond when you squeeze the trigger.

I personally believe that anytime one ever mentions George Zimmerman, they should point out that he is not now nor ever will he ever rise to the level of being shit. Now he is simply not even shit with one less gun and an amount of money that will probably not suffice to cover for the fact that he killed a kid and tried to walk away like he had to do it. He did not have to kill that kid, who was not more a thug than many another teenager ever was. And this asshole could have stayed in his motherfucking truck. And after killing a kid, he could have tried to have the half-assed human decency to not flaunt his getting away with it by making the parents of that child have to look at his unapologetic nonsense.

And if that money does go directly towards anti-BLM and anti-Hillary Clinton activity instead of towards his own legal fees--I don't know what to do but laugh at his foolishness.

He needs to take care of himself. That's all he needs to do or die. But he doesn't have the bank that changes whether it matters that black people die in the streets or incarcerated in disproportionate quantities in this country and his $250K doesn't make Donald Trump a better candidate.

It all goes without saying, of course. But I still needed to say "Fuck that guy."

Posted by Vixen Strangely at 11:32 PM