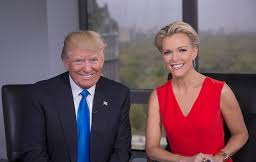 I
I'm not sure what was being hyped on a night when there was still a Democratic primary going on--was Megyn Kelly of conservative-friendly Fox Mushroom Farm supposed to actually deliver a critical and tendentious interview--which was staged like a week or so ago and which the Fox PTB and the Trump campaign were altogether happy with? Shit, this is a campaign so brittle regarding it's image that an interview can get cancelled just because a reporter turns out to be bilingual. This was not even remotely ever going to be a moment when Trump got called on, for example, his "bleeding from, wherever" comments. He basically justified calling her a bimbo to her face.

I think this probably made for pretty good ratings right? Could she be Trump's White House spokesmodel? Based on the job interview she just gave, why not?

Posted by Vixen Strangely at 11:24 PM

Vixen, I'm always pleased when I get to agree with you about something. You know, we more or less agreed about David Brooks.

Megyn Kelly is on the brink of becoming a legend in her own mind. I remember being so taken with her the first time I saw her programs. All those beautiful, blonde good looks against the glittering lights of New York, cast in a shade of blue.

I thought, “My God! Dagny Taggart left the railroad and has become part of Fox News!” She seemed the perfect Ayn Rand heroine.

Oh, how the mighty have fallen in my esteem. I am appalled at the way she has interjected herself and her television personality into our political process. Many times I've wanted to shout, “Megyn! It's about the country choosing political candidates, not about you.”

“Now the Republican and Democratic political candidates and conventions, brought to you by, for, and of Megyn Kelly. The beautiful, the lovely, the celebrated cheerleader, Megyn!”

The G&L Alicia can tell you whenever Megyn's face comes on the air I sing, “Fairy tales can come true, they can happen to you, if you're Megyn Kelly.”

She must be our new Oprah.

Incidentally, I rarely compliment CNN, but I have to appreciate the fact that they have added a lot of conservative commentary.

It would be nice if we had a real news program that actually dealt with news. Soon the Fox broadcasts will be titled. “And Now Megyn Kelly Talks about Donald Trump!”