The Trump Problem 4: Who is this guy? 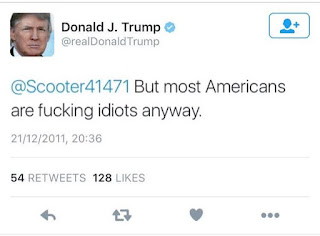 The revelation that Donald Trump posed under the pseudonyms "John Miller" and "John Barron" to plant stories about himself this past week are weird, right? Like, who brags about their love life to news outlets under an assumed name to build up their reputation as a "player"? Take this sort of thing:

“Actresses,” Miller said in the call to Carswell, “just call to see if they can go out with him and things.” Madonna “wanted to go out with him.” And Trump’s alter ego boasted that in addition to living with Maples, Trump had “three other girlfriends.”

Miller was consistent about referring to Trump as “he,” but at one point, when asked how important Bruni was in Trump’s busy love life, the spokesman said, “I think it’s somebody that — you know, she’s beautiful. I saw her once, quickly, and beautiful . . . ” and then he quickly pivoted back into talking about Trump — then a 44-year-old father of three — in the third person.


That's weird. (For what it's worth, Bruni considered him a "lunatic". Which is just as well--not all women think he's especially great. ) But perhaps his attempts to appear like a playboy were just brand-building. That he also used one of his aliases to try to cheat workers is a bit more disturbing.

Which leads me to my point--he's famous as hell, but he doesn't need fake names to make you wonder who the heck he is. Take his self-declared net worth-- TEN BILLION DOLLARS. Sounds great, right? One of his selling points in his campaign has been he's able to be self-funded. Well, no. His cageyness about his tax returns has prompted some to take a closer read of what his public financial information reveals--a topic which has been previously disputed. But there's enough out there to make one really wonder--does he think people are stupid? Maybe a lot of people don't pay attention to policy details, but who a person is, matters.

And he is, after all, now a person who has told us one week that he would do everything he said he was going to do, but now indicates what he has said is all just "suggestions".

Hi Vixen, I think you're asking the wrong question. As you know, I resist these idiotic conversations that involve people screaming tit for tat, left and right, over things they've seen on TV or read on the Internet. Frankly, public discourse in the US has reached a level of banality. I'm beginning to think a lot of blogs simply server the purpose of giving an outlet to people so that they don't scream at their husbands or wives.

I'll say a few things about Trump that you may not have heard. Obviously he's very good at capturing the media attention and making sure that the world is always curious about him, as your post demonstrates.

The issue is that we may not know everything about Trump, but regrettably for her, we do know everything a out Hillary. Trump is something of an unknown quantity, but we have been living with Hillary for 25 or 30 years. We know all about Kathleen Willy, Juanita Broaddrick, Paula Jones, and Hillary's responsibility to contain "bimbo eruptions." We know all about Whitewater and the Rose law firm. We know all about H's temper tantrums; we have been living with this woman for a long time, and many of us are old enough to have actually 'been there' during the periods when the Clintons were doing their thing.

Hillary has enormous unfavorables because we know about her and about Benghazi and about the emerging investigations of the Clinton Foundation and the email server, etc ad nauseam.

I doubt if I know much more about Trump than you do, but here are a couple of things that are interesting.

Trump's grandparents cam from a small island off Scotland. It was closest to Iceland. Trump's mother spoke Gaelic. This means that Trump's ancestors are vikings with that Scottish scrupulousness about money. It is not surprising he is a Presbyterian, because that is the Scottish church that still occasionally gets ticked at Queen Elizabeth for historic reasons I won't go into.

A lot of people in labor have worked with Trump, and as a consequence there is a high degree of trust and appreciation because of the way he has treated them. That's why there is a group of “teamsters for trump” now. He has done big favors for pe9ple, like paying their hospital bills or giving unexpected gifts. A guy changed his tire once, and Trump said, “Let me pay you for this.” The guy declined, but when he got home from work, his house was filled with flowers and there was a card from Trump telling him his mortgage had been paid. There are a lot of other stories like this.

Hi Vixen and Mikey. I looked at the link on Mikey's comment and I am in agreement that the story I offered is an urban legend. I'm not surprised, and frankly it's hard to understand how anyone could be surprised with all the folderol that passes in our cultural communications.

(You know, interestingly not all urban legends are untrue. For example, I know of a road outside a big city where people fairly regularly have the “phantom hitchhiker” experience. And there are other urban legends that are not simply a phenomenon of imagination.)

Look, Donald Trump has done his share of good things for other people. It's no big deal. If I had $10 billion, I'd be a lot more generous as well. I'm sure you would be, Vixen, and I imagine Mikey would be.

I favor Trump because of his positions and the fact that he freely borrows from the right or left if he feels that is the right way to go. I also appreciate the fact that he is a man of tremendous accomplishment outside of the realm of politics. And I think he has raised some really wonderful kids, especially since a lot of rich kids are spoiled, nut-case brats. I don't think he is perfect in any way. He's flawed like everyone, but at the present juncture I think his views and resolve offer good possibilities for the United States.

Here's something I wish that nobody thinks about: I wish we would be like France and stop naming streets and highways and expo centers for politicians. I wish we would name them for artists, novelists, and other people who have done something with their lives besides run for office and scrounge money for their state or district.

Think of it. Wouldn't it be nice to live on Picasso Lane? Or the Victor Hugo museum of fine arts? Or the Robert Anton Wilson freeway...?