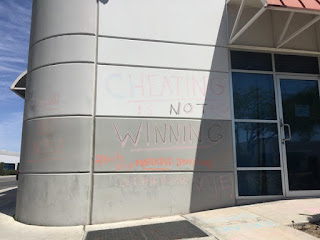 I'm going to take something of an, I hope, not especially bold tact and suggest that if a candidate for a certain party wins a caucus, it should not actually come as a tremendous surprise when that candidate comes away with more delegates in that state's party convention.

That it was a surprise to some Sanders supporters is due to some fairly awkward rules regarding how Nevada does things and somehow, people got the idea that Sanders retroactively won. As in, that was the sort of headlines that had been used.

It's disappointing, obviously, when one's preferred candidate does not win. It's galling when you don't think the rules are favorable to your candidate. But I really think there's something wrong with 1) Assuming that Clinton winning must have been due to cheating and 2) throwing a fit over it.  There are people who, for a variety of reasons, might have simply preferred Clinton in Nevada. They just did. They showed up.

It's in the same vein as complaints that NY primary rules weren't favorable to Sanders, or that people who support Clinton must somehow be paid-for "shills"--it's not actually "unthinkable" that people who have been Democrats for years like someone and vote for someone who has been an admired party fixture for years. It's very thinkable. That's why it's happening.

Funny the Sanders campaign didn't apologize when Clinton won the Nebraska primary on Tuesday but Sanders gets the delegates because he won the caucusin March.

Why do you suppose the Clinton campaign didn't make a gigantic fuss about that, accusing Sanders of destroying democracy? I guess they probably didn't think of it. They just knew the rules ahead of time.