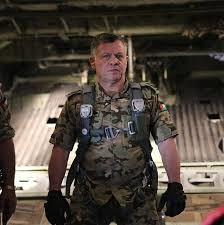 King Abdullah of Jordan responded swiftly and forcefully to the actions of ISIL against one of his subjects and airmen, the hostage Moaz Al-Kasasbeh. He authorized an airstrike against ISIL. (No, FOX News and FOX News fans, he did not participate in the sortie himself, nor was he an actual crewman of the Federation ship Voyager.) It was one of many air missions flown against ISIL--in addition to a US-led coalition.

The US is actually doing something against ISIL. Has been. Like, it's been a problem we are dealing with--although even I use the shorthand of "getting into it" to mean "ground troops" when shooting up folks from air certainly counts for something (Kosovo, for example, was an air war). King Abdullah is our ally. And this is obviously just background for the point I want to get into--so why don't I just?

When I wrote about the offense taken by certain parties about the historical reality of President Obama's comments at the National Prayer Breakfast, I was largely addressing what I perceived as a deficit in understanding that ISIL was not some unique threat doing things we'd never seen before historically, and that it was absurd to think that the religion of Islam was the sole reason for their emergence. And yet, I have read instances online and even from liberals indicating their belief that this constitutes a tu quoque argument against doing anything against ISIL because westerners, Americans, or Christians are "just as bad."

Straw man, much? Because President Obama could not possibly be suggesting doing "nothing" if in actuality his policy is already enacting "something". We're killing ISIL guys--hooray! (for some value of "hooray" to people who think this is the thing we need to do, obviously). But what was Obama obviously getting at that even liberals seem to be missing the point of?

Oh, yeah--our allies are Muslims. His argument was against the foolish claim that we are in a war against Islam itself. You know, the thing where Obama is supposed to say "Islamic extremism" over and over again, to do what--I really don't know. But being in a war with Islam itself would be really, really weird if the US was allied with the current Iraq government, or whatever acceptable freedom-fighters exist in Syria, or the Hashemite King of Jordan, Abdullah II, a direct descendent of Muhammad (PBUH).  Because those people are of the Islamic faith, and we are not at war with them.

We shouldn't be against Islam, because people that do evil things exist in all societies. We are against those that do evil as a matter of course, because they make having civil societies impossible, whether Islamic, Christian, or interfaith--including all people. The inability to coexist and the willingness to destroy whatever good that does exist, are marks that make any person or group incompatible with civilization. A religion, an ethnicity? For what it's worth--singling out whole peoples is genocide. People pissed off about getting told Islamic people aren't the worst of the worst need to search themselves for why they are so cozy with that assumption. But they shouldn't flaunt fancy ideas like tu quoque when they actually don't understand what in the hell is being argued in the first place. (And why yes, I guess you could characterize being told you're a little bit genocidalist as an ad hominem while you're at it if you're making a tu quoque argument about this case--and I will congratulate you for learning a couple words of foreign languages, whether you understand them or not..)
Posted by Vixen Strangely at 5:21 PM

I can't possibly compose a better answer than Ta-Nehisi Coates already has.

So...Tu Quoque, that's the town just before you get to East Quogue, right?
~

I like Ta-Nehisi for not sugar-coating it but giving it up straight:

Now, Christianity did not "cause" slavery, anymore than Christianity "caused" the civil-rights movement. The interest in power is almost always accompanied by the need to sanctify that power. That is what the Muslims terrorists in ISIS are seeking to do today, and that is what Christian enslavers and Christian terrorists did for the lion's share of American history.

Slapping a little label called "My religion made me do it" has gotten people away with murder for years. Countering it with a fat cup of "we aren't buying it" is the answer to ISIL and every other asshat who wants to try it on. And that goes with Christianists who want a victory that justifies their smugness too. There's no value, politically speaking, in a voice saying "Kill their leaders and convert them to xtianity" a la Ann Coulter. The best thing we can aim for is a little peace, more often than not.

First, a minor correction. Kosovo was most certainly a ground war. We merely expanded it with and air campaign against Serbia to put pressure on Milosevic to stand down his troops.

You're right, the 'we're just as bad, look at the native americans' sort of argument doesn't make a lot of sense in this context, but I am struck by the precious irony when we rail at Putin that modern civilizations don't invade other, weaker countries. That's going to be a little hard to take seriously.

Otherwise, the key point of the military action against IS that needs to be discussed is that IT ISN'T OUR FIGHT. There is absolutely no strategic nor tactical reason for the US to be fighting in Iraq and Syria. If the nations of the region want to fight IS that's fine, but if they don't we shouldn't. If we're all about fighting evil, why aren't we bombing Boko in Nigeria? Wars to satisfy domestic political concerns, whether they be in Gaza or Iraq are the most evil kind of wars I can imagine...

Hi Vixen, Coates has an interesting article, but I was there.

Not everyone in the civil rights movement was a Christian, but many were.

The Southern Christian Leadership Conference was a Christian organization filled with Christian activists. Many of them ministers and members of their congregations.

They were definitely motivated and inspired by the fervent belief that they were carrying a Christian message to people who either were not Christians or who had misconstrued the Christian message of love and brotherhood. Martin Luther King was non-violent, preferring the methods of Gandhi because violence was in opposition to his Christian beliefs.

It's amazing how many things get reconstructed as history moves on. You will see this yourself when you get to be my age and you find people addressing events that you lived through and participated in.

You cannot separate the Southern Christian Leadership Conference from Christians performing Christians activism in the name and at the behest of Christ's message of universal love and regard.

Outside of that, of course there were many that participated who were not specifically Christian. However, it is absurd for people today to try to assert that Martin Luther King was not carrying a Christian message on behalf of an oppressed minority.

Had Christianity not been his central message, the civil rights movement would not have gotten off the ground. My friend the Presbyterian minister, for example, regarded Christ as his central motive for participating in the SCLC in all his activism.