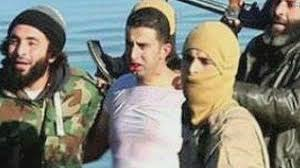 
I have no interest in watching the death by fire of this man which Jordanian intelligence indicates may have been from a month beforehand. A death of a man in a cage by fire is an extraordinarily painful thing, and watching snuff porn was never an interest of mine.
If this is what ISIL wants to show about themselves; they aren't happy enough that they behead a handful of people here or there, but let it be known they also sometimes set a human being on fire. What can we do about that kind of mentality?
Is this supposed to be attractive? Is this supposed to be how they recruit? By gleefully, publically, being the worst sort of monsters that can exist?
The Jordanian government has swiftly responded by executing ISIL jihadist prisoners.  Did ISIL think something else would happen?

I know they are human. And yet I question their grasp of human decency, empathy, whatever they think they stand for, and how they are standing for it. Intellectually, the demonization of a group of people is suspect for me. Looking at these people and what they do--seeing demons becomes easy.
But I can't hold with Lindsey Graham that 10K of US Americans have to address this mess. How many angry Jordanians are there? How many other aggrieved people--right in the Middle East? They know the score--what the hell would they need or want us for (besides arms and money?)
I know, let's give 'em (the anti-ISIL forces) arms and money. But for me, I don't think a US boot is good for diddly on the ground there..  Not when Middle Eastern boots have such reason. I grieve with the family of this man for what has become of him, but hope like hell my country stays out of it. Our record with these things isn't the best.
Posted by Vixen Strangely at 12:23 AM

We created ISIS, via boots on the ground and 'regime change'. Shameless assholes like Lindsey led the charge.

ISIS has a long way to go before they kill as many people as we did in the process.
~

I think this horror will mark a turning point in ISIS' existence. This is the "bridge too far" moment, and I think their days are numbered.