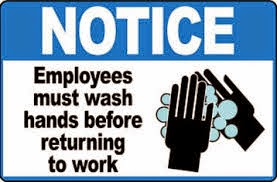 “I was having a discussion with someone, and we were at a Starbucks in my district, and we were talking about certain regulations where I felt like ‘maybe you should allow businesses to opt out,'" the senator said.

Tillis said his interlocutor was in disbelief, and asked whether he thought businesses should be allowed to "opt out" of requiring employees to wash their hands after using the restroom.

The senator said he'd be fine with it, so long as businesses made this clear in "advertising" and "employment literature."

“I said: ‘I don’t have any problem with Starbucks if they choose to opt out of this policy as long as they post a sign that says “We don’t require our employees to wash their hands after leaving the restroom,” Tillis said.

Uh huh. I know a lot of other people have pointed out that this is just nasty, and obviously, this is how e. coli spreads, and so on, but just from the sheer anti-regulation nonsense aspect--if he doesn't have any problem with a business "opting-out" of hand-washing so long as they "advertise" (right, player?), what mechanism would actually make any establishment advertise any such a gross thing? The "market" would give the business ample reason not to advertise it.  And if people got sick from some nasty, non-hand-washing people, the very fact that other businesses out there were playing by the same "opt-out" rules would make it harder to track down the source of the problem.

It's really hard to take someone entirely seriously who has a perspective like this, and yet, I have no choice but to take him at face value. Gross.
Posted by Vixen Strangely at 9:35 PM