Sometimes a Spox Clashes with the Decor 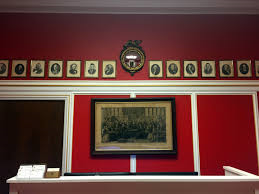 The guy who was communications director for Rep. Aaron Schock was totally fired for saying bad thing on the internets. As Schock points out--this sort of thing is unacceptable:


In a statement to the Peoria Journal-Star, Schock said that Cole offered the congressman his resignation.

"I am extremely disappointed by the inexcusable and offensive online comments made by a member of my staff," Schock (pictured) told the Illinois newspaper. "I would expect better from any member of my team. Upon learning about them, I met with Mr. Cole and he offered his resignation."

According to Buzzfeed and ThinkProgress, Cole wrote on his Facebook page that he thought, "They should build a mosque on White House grounds." He also wrote in the comments of that post that "It would be nice for the President to have his own house of worship, since he's not been able to find one suitable in DC since 2004 when he moved here."

Huh, and you know who all else never stepped foot in church after election?

Look, this guy did say race-and religiously-based hateful things. I get why he needs to go. Some people will moan about this being about political correctness, but I think this is mostly about not being the kind of fool that makes his employer look foolish--as such stupid statements do. The idea that Obama should have a DC mosque because he's supposedly Muslim is a thing I've blogged about before. People who want to see Obama as "the other" are happy to mis-religion him. They are wrong.

Now, it is alleged that Schock has an office uniquely upholstered, which has earned some wagging tongues. I like it myself, but everyone knows I love the color red. The fashion-forward congressman has been chastised about accepting a gift of "remodeling" services for his office. I don't even know. I know this guy clashed with a lovely office, though, so there's that.

Posted by Vixen Strangely at 12:50 AM