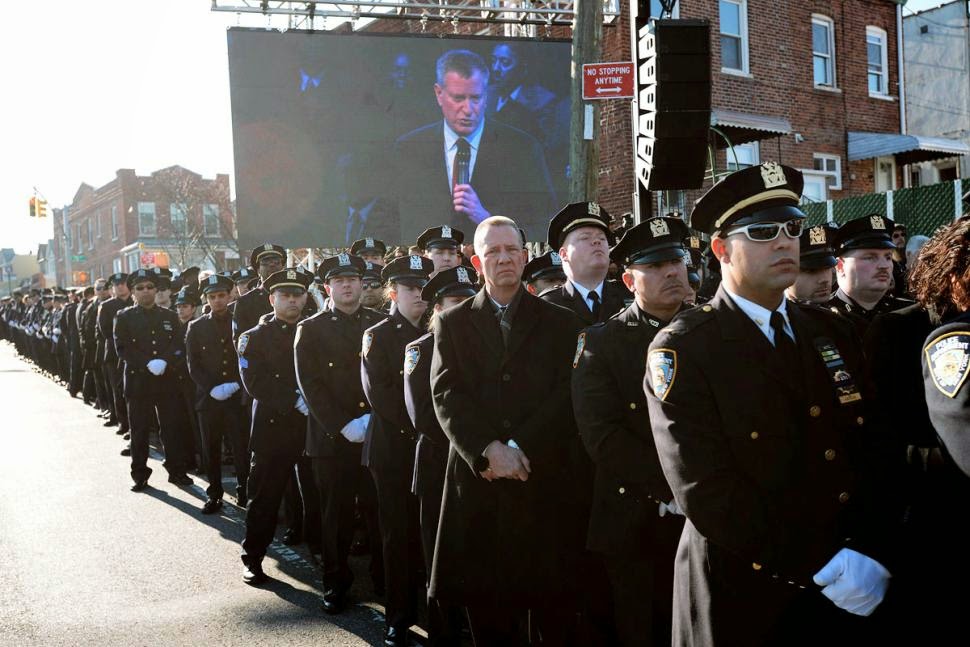 On a day where the family of Officer Rafael Ramos was mourning their fallen hero, hundreds of members of the NYPD in attendance at that funeral decided to make his death at the gun of a fucking psycho who terrorized his mother and shot his ex-girlfriend in the stomach--all about them. They politicized it.

This was a solemn occasion where respectful attendance on behalf of the officer was entirely correct--but this?

I am having a problem understanding why there is a problem with Mayor de Blasio to such an extent that disrespect of this officer's family's day was warranted. The mayor had an opinion as the father of a black son. The NYPD has a history.  The overwrought NYPD union president who started these histrionics with his hair on fire "blood on his hands" rhetoric, has a fine lying history. Surely, there was a way to show their respects to the brother officer without being disrespectful and hijacking the moment.

But that has nothing to do with the Ramos family. They deserved respect, whether anyone thought de Blasio did or not. They are the ones who lost a brother, husband, father. And I feel like the funeral for their loved one is overshadowed by this display. If these NYPD members had a point, did they have to do it this way? Could they not have done something less Westboro Baptist?

My sympathies remain with the family of the fallen officer. I had a funeral myself for a family member this week and can point out that I lose my composure a little when I hear "Taps". Being physically on the line as a part of one's job doesn't mean the family is ever reconciled with it--hell, we aren't reconciled when someone who was ailing for years passes. The day was about their loss, and I just didn't think that display was appropriate to it.
Posted by Vixen Strangely at 11:28 PM

There's a lot of flase piety, breast beating, wailing, and waving of the bloody shirt going on here.

It's shoddy and cheap.

It's about contract negotiations. It's how Lynch and the PBAs operate. They once said they were going to bar superpatriot fascist mayor Giuliani from police funerals too, though Rodolfo seems to have forgotten their old enmity given the opportunity to shit on de Blasio.

Not that they shouldn't have a right to get officers the best deal they can, but you can tell the difference between a fraternal-organization PBA and a real labor-movement affiliated union by the way these guys refuse to discuss the real issues and make it about something else, lying and misdirecting and exploiting human emotion to get their way

Meanwhile, if you ask one of the critics exactly what DeBlasio has said that's "anti-cop", they have nothing. They can say that the man has an anti-police attitude, but they can't pick out any specific statements that he's made that can be construed as anti-police.

Even worse, the "kill a cop" chant was a complete fabrication, but the correction won't be broadcast to as many people as the deception.