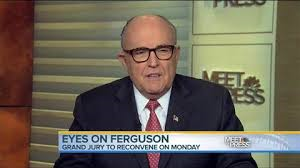 “Ninety-three percent of blacks are killed by other blacks,” Giuliani said, triggering a heated argument on NBC's "Meet the Press." “I would like to see the attention paid to that that you are paying to this.”

Georgetown professor Michael Eric Dyson, a frequent MSNBC pundit, said Giuliani was applying a "false equivalency" to the situation in Ferguson, where a grand jury will soon decide whether to charge Officer Darren Wilson in Brown's shooting death.


Mayor Giuliani is impressed with the statistic the 93% of blacks are killed by other blacks. (83% of whites are killed by other whites.)  There is some research that suggests that income inequality has a higher correlation with homicide rates than race. But the discussion, before Giuliani changed the subject, was what can be done to address police brutality and the problems stemming from cultural attitudes that come into play when white police officers dominate in a community of color.  A statistic that might be more relevant, then, is that black people are 21 times more likely to be shot by the cops than whites.

But Giuliani's weird direction change concludes that "White police officers wouldn’t be there,” Giuliani said, “if you weren’t killing each other."

By "you", Giuliani sounded like he was including, I guess, Michael Eric Dyson--two quick things: I'm pretty sure Mr. Dyson is not out there killing anybody, and I'm also pretty sure he's not a big fan of it, either. And yet it sounds an awful lot like "Why don't all you black people get your shit together?" as if there were a pathology about blackness that excuses police wrongdoing.  Also, if white cops were actually fixing the problem, that might almost not be changing the subject--but if they aren't...well let's address that, then!

Furthermore, one can be critical of the police state without being pro-crime. The exchange was pretty short to have so very much wrong jammed in it, but I am not sure we had any reason to believe that former-Mayor Giuliani would be much more sensitive to the issue than we saw here.
Posted by Vixen Strangely at 4:05 PM