Climate Sunday: Walmart is All About Coal 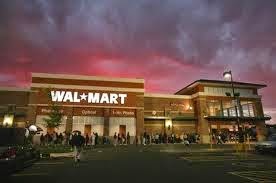 Since we are this close to Black Friday anyway, and Walmart often comes up as a big old capitalist cultural debaser, what better time than now to point out they love one of the dirtier fuels, coal, so very much?

And we aren't just talking about selling manufactured crap from China, which uses so much coal. They serve areas where they hook up to a grid where the local plants produce coal energy. They have talked about renewable energy but they could do better. Solar is actually pretty cost-effective to install right now, and while we're at it, I find there's a lot to be said for them not going for growth so much as sustainability as an important aspect of their enterprise. They could pay their workers better and live up to their green-washing, and still make a tidy profit because of their size.

Then, I might even be tempted back into one.

Posted by Vixen Strangely at 12:02 AM

The report, “An Analysis of Walmart and Walton Family Political Spending, 2000-2012,” comes after Walmart’s recent hiring of Dan Bartlett, a Bush Administration official known for his work in creating the “weapons of mass destruction” narrative, to replace Leslie Dach as Executive Vice President of Corporate Affairs. Dach worked in the Clinton Administration.
----
~