Under the Cover of Night, Mr. McCulloch? 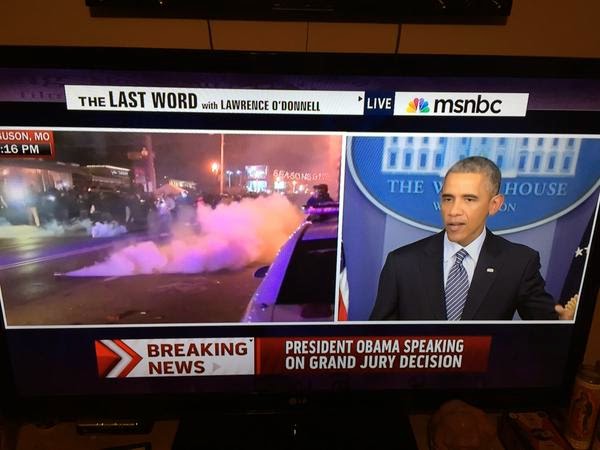 We can criticize Gov. Jay Nixon's decision to declare a state of emergency in advance of any unrest that was to come as a result of the grand jury decision not to indict police officer Darren Wilson with any wrongdoing, but surely, when he didn't call for a special prosecutor and take this particular case out of the very biased hands of prosecutor Robert McCulloch, he'd already made his bed. I don't know how he's going to lie in it tonight. This was set up for failure from the start.

I will say Robert McCulloch didn't mind making people wait until nightfall, even though he knew very well what he was going to announce, and did not mind lying in front of people. He cast blame on the traditional and social media for making the death of a young man into a big deal he had to half-assedly pretend to prosecute. As if unaware that a young man being killed needs no media furor to be a serious thing. It's said one can indict a ham sandwich, but apparently you can't indict a cop. If anything, he demonstrated that he could make a fine defense attorney, and I hope he gets an opportunity to make a career reassessment in the near future. The only reason for making people wait was knowing full well that this announcement would tear through that community looking for justice and then, shit would fly.

And it is flying. And fingers will be pointed at "those people". Because this is how the supremacists win. The cops can use teargas and call it "smoke bombs", and people will be arrested, even if they flash their press credentials, and even if all they were doing is protesting, like the First Amendment gives them every right to. With a system so apparently broken, this is how the people in power want it--and they get it. In the end, even if 99% of the people protesting were doing it right, the cameras focus on fires and broken glass.

You can criticize President Obama for urging peaceful protest on people who already know they are going to get their esophagases burned and their heads broken--but on some level, what he's trying to say is "Don't give them shit to use against you, because you know they will." Because they do. And it looks fucked as hell seeing him talk about how we've advanced as a nation while teargas canisters fume down the street in split screen. It is. But he's right when he says this is America's problem.

It's just a really hard problem to see clearly in the dark. As the person who announced this acquittal at night surely must know.

Posted by Vixen Strangely at 11:41 PM

Fuck him. No justice, no peace.

The conservatives got the big wins they wanted. Dead minority, continued slander of Al Sharpton as the real race problem and destruction and rioting in AA community designed to justify vontinued right-wing bigotry.