Are Things Politicians Think Not Part of a Story? 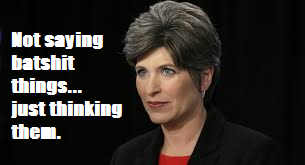 So, a handful of blogs I respect led me to this National Journal piece regarding how, even if she is a really fascinating person and a darn good candidate, Joni Ernst might narrowly lose to Bruce Braley. I think Kilgore's commentary was what got me out of the boat.

I am going to agree with Goldmacher's narrative to an extent--she served our country, she's a mom, she's got a farming background, and the support of Vander Platts and the whole Iowa GOP thing--she's a "good candidate". But the point the folks I've been reading has to carry a little weight--it absolutely does with me, anyway, and is basically what my blog is about--she's a great candidate, but she believes batshit things. And at some point, if we're being honest, now, whether a person is susceptible to believing batshit things matters.

Thinking that zygotes are people (I always say--fine, give 'em the right to vote, but good luck getting them to the polls...) and that the UN is gonna steal our golfs and overthrow the US with clever use of bike lanes is troubling. It isn't a question of whether there is a decent knucklehead constituency out there that believes this nonsense. It's a question of whether it even makes sense to believe it, whether it flies as plausible policy, whether it is worth it to invest trust in people who, given the opportunity, will inject some degree of guanothink into anything they do. I understand why Democratic pols don't directly challenge the guanothink (they should give it the odd try though, even if they don't make a habit of it.)

But there isn't much of a good reason why what a politician stands for should be as much a consideration for a journalist looking at the big picture regarding a candidate, as their "narrative." I might agree with Peggy Noonan about very little, but when she witheringly reduced Sarah Palin's selection as McCain's running mate to narrative, she had a very valid point. Pandering to the base is dumb, and falling for life stories is dumb. There really is a case to be made for recognizing and maybe even trying to encourage competence. The article glancingly has a graph about how Ernst can be characterized as an extremist based on her positions--that she is one is sort of the big old elephant in the room. If Ernst loses because of a Democratic Machine--it was mobilized because, in part, she made moderate Dems' jaws drop. That jaw drop is real. It should be heard.
Posted by Vixen Strangely at 12:01 AM