George F. Will is Not an Expert on Things. 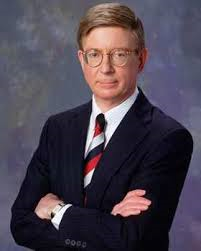 One of the amusing things about punditry is it convinces the accepted class of mainstream commenters that their opinions on any and all things are valid and probably pretty damn smart.

George Will is an ancient and accepted pundit--and he is so wrong about stuff that Chris Wallace has to drag his ass up.  He unbelievably tries to say ebola is quasi-airborne because...nothing, on the FOX News Sunday show, and literally cannot be told he is wrong. Even the doctors he thinks he is quoting will go on to say he is wrong.

This is of a piece with his shtick though. Like, regarding climate change, where I have raked him over, he trots out the same things even though better brains than mine have said "Stahp".

He is an expert about being a pundit who was mildly relevant in the 1980's. Please, Old Media, stop pretending he's relevant about anything else. He's very uninformed. He's like some 1950's sex manual recommending a cola douche for birth control. It's like, that level of embarrassing.
Posted by Vixen Strangely at 12:58 AM

Yet the WaPo will keep publishing his tripe until he finally keels over.
~