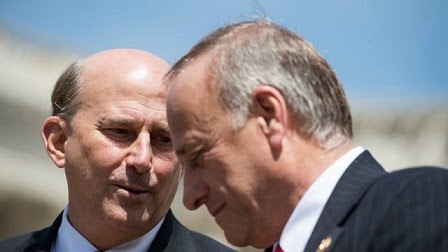 You know, reading Charles Pierce is a pleasure for me--he has a wicked way with a phrase and I agree with him on a thing or two. So, I was interested in expanding upon a concern of his that touches on one of my own persistent puzzles--how it happens that people running for office are not called out when they seem to be dabbling--nay, professing, or at least out of one or more sides of their faces--in sheer and utter batshit. There are people who are by no means political neophytes who seem to have been delinquent on their reality bill--they are totally disconnected. I think it would be meaningful if objective reality could be entered into a political debate to actually determine who is more legitimately competent to deal with actual issues and not group hallucinations experienced by FOX News viewers and the WND readership, but I find myself altogether cynical about it.

I found myself not that long ago mourning the reality that there is no penalty for basically racist or conspiracy theorist views in some districts. (Hell, it seems to work, to some degree, to maneuver the "squeaky wheels" into higher profile positioning.) It bothers me to no end that theres a genuine likelihood that this mid-term election might even bring a bumper crop of "knuckleheads" into Congress that makes the 2010 freshmen look like fucking Solons.

But I get the reticence of Democratic challengers to call the whackadoodles out, I genuinely do. You take a contest like Tom Cotton vs incumbent AR Senator Pryor. Now, Cotton has a whole raft of signifying nonsense that has come out of him (blaming Obama for the Ukraine situation, carping on food stamps like they only started being part of farm bills since 2009--not since always), And he's down the line a social conservative--anti-abortion, anti-gay marriage. But he's kind of funky in that Rand Paul, not understanding social contracts kind of way. But you know why Pryor can't call him a whackadoodle, even if the name kind of fits?

Here's part of the Arkansas constituency,  The Duggar family is Arkansan and there are about a billion of them. I do not think Jess Duggar is all by herself thinking that abortion is just like the Holocaust and evolution is behind the Holocaust in the first place. Yes, it is stunningly ignorant. But she is not alone. And sadly, a candidate like Mark Pryor is going to go for not pissing these people off. You want to call Cotton a "knucklehead"? Neat. You call his fanclub "knuckleheads" and they turn out to the polls in high dudgeon and they smite you.

They are a smity crowd, your Bible-based knuckleheads. Iowa--the state first on the presidential primary passion-play, is another bastion of knuckleheadedness. Joni Ernst is doing just great in the polls there despite being a knucklehead because they are conditioned to like knuckleheads. This is a place where the GOP courts the approval of the FAMiLY LEADER folks, which is like, the distilled essence of the Values Voters Forum. She doesn't sound crazy to them.

You all know me--I am as anti-knucklehead and anti-theocracy and anti- Religious Wrong as it gets, but I understand why candidates don't throw down that culture war gauntlet too hard.

Now, the turnabout is, that's only for Red States, I think. You let a knucklehead loose in a blue state and we'll mock an SOB mercilessly. The Knucklehead factor explains why Ted Cruz and Ben Carson came out on top in the Value Voters poll, but even conservatives might be skeptical about the value of that opinion.   This should limit the effectiveness of a real knucklehead candidacy.

And yet--I really hate anything that systematically encourages the thriving of the knucklehead subculture. I don't know what the answer is--make laws trying to steer RW media to actually posting things that are true? Restricting homeschool requiements?  Meh--every last thing that could work, could also just make 'em knuckleheadier.

I wish I had an answer to the larger issue--I don't.
Posted by Vixen Strangely at 12:00 AM

I don't know what the answer is--make laws trying to steer RW media to actually posting things that are true?

An effective opposition party with a 50 state strategy and a commitment to doing right by their voters.

What do we have now?

A couple of corrupt corporatists who'd rather see the GOP win elections than support a liberal Democrat.

Who picked them? Nancy Pelosi picked Steve Israel. And Our President picked DWS.
~