Climate Sunday: Diseases Like Ebola are an Environmental Issue 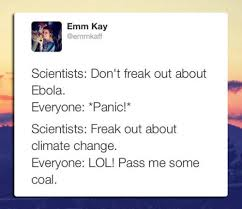 One of the things I sort of hate about writing about climate change and the environment (don't get me wrong--it's still my jawn) is that it pretty much seems like all the things I ever write about can be looped back to climate change, as if I were some kind of One-Note Nancy or something. But really, there's very good reason to give mankind's weird earth-domination habit the eye for probably unleashing ebola on all of us. And this isn't even the half of it.

West Nile used to be some kind of thing we never thought about in the contiguous 48--but then came climate change.  Malaria, Dengue, Lyme--all things that go better with climate change. Basically, if you are a virus or bacillus that can totes pwn pretty well when things go pear-shaped (which is the thing that makes infectious diseases what they are--they are opportunistic) you will love some climate change. Diseases are migrating because conditions are becoming more favorable for them.  This isn't a problem of border-control--this is a problem of environment-control.

Now, this isn't to say that the spread of odd, dangerous, deadly diseases is the worst thing about climate change (although it's pretty bad). It's to point out that we are all pretty much at the whim of forces that are based in science and that we have some, but not great, control over. The science folks are calling our era right now the Anthropocene, because we have great ability to screw with our natural environment, rendering it--something else.

We also have a great ability to massively autodarwinate, as we should have understood since our mastery of the atom.

But even if we have great ability to disturb the planet we live on--we also are still prey to the littlest predators. And we should take that very seriously.  And we currently don't take it half seriously enough.
Posted by Vixen Strangely at 11:02 PM