The "Crowding Out" Argument

I'm just going to stick with the previous blog post for a bit because I really wanted to know what the pro-life reason for denying WIC expansion so poor families could feed their children was, and now I have it. You want me to share? Here it is:

The undeserving poor are using their WIC-privilege to make it harder for the hard-working Americans to get their hands on the baby formula.

In other words, and I mean, to use the exact words, if we make it easy for WIC families to buy formula, they will "crowd out" other folks' access. And I really did think it was going to be something like that. Here's our star explainer of things, MTG, breaking it down:

Marjorie Taylor Greene blames WIC, an assistance program that helps poor moms buy baby formula, for contributing to the supply shortage: “The WIC program is making it more difficult for [parents not on WIC] to buy baby formula.” pic.twitter.com/EvYBaWqiHW

So, to get this completely straight, she believes that with the WIC vouchers, the food insecure are going to corner the entire Enfamil market because they don't have shit else to buy. She's saying that like she has received a special insight into how broke people work the system. But WIC isn't the customer--the families are. And they have limits on their vouchers that just wouldn't make her scenario likely.
Her partner in awfulness, Matt Gaetz, has the following to say: 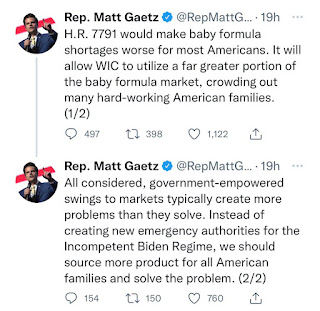 I don't know how many families he thinks are on WIC, but saying they are "crowding out many hard-working American families" is some pretty deliberate language. He might not be aware how many WIC participants are working poor, such as military families, and also, and I want to careful how I put this--how many are white. When I hear Republicans put the words "hard-working" and "American" together, I feel pretty cool saying they are implying it's a matter of white folks vs. welfare queens. In other words, the message is: this is a giveaway to those people. You need to starve those people before they starve you. (Seems familiar, doesn't it?)
But as to the rest of his Twitter message: the Biden Administration is sourcing formula from overseas now, undoing the stupid trade restrictions put in place by the previous administration. Gaetz wants to make it appear that it's Biden who is useless, when I don't see all the help his posse are offering. And the message these Republicans are sending is very much what George Carlin said long ago about these conservatives.
at May 19, 2022

wow. there really isn't anything to their ideology other than hate. problem is, they're gonna run out of others to hate pretty soon and are gonna turn on each other in droves.

Well, the problem *for them*. And I think things like Madison Cawthorn's "DARK MAGA" stuff is almost quaint in that like, if they decided to turn on each other now, it might interrupt some of the fascism already in progress.