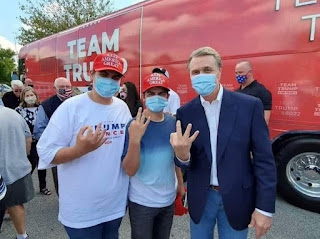 It's rare to see the NYT actually use the "r" word (racist) to describe a Republican's rhetoric, but it has finally come to this--because it's pretty hard to ignore that David Perdue has to know full well what he sounds like in his last-minute attacks, not on Kemp, who will beat his ass in this primary, but on Stacey Abrams, the Democratic contender for Georgia governor. Today he gave two comments, both vile--he describe Abrams as "demeaning her own race" and said she should "go back where she came from."

Ah. These were in response to comments she made regarding what could be improved in Georgia--like job creation (she did not specify race when she talked about job creation, Perdue chose to racialize it by saying "demeaning her race" for suggesting there should be more opportunities than farm work or hospitality) and improving key quality of life statistics, such as maternal mortality.

GA may be #1 place for biz, but we’re #48 in mental health, #2 in uninsured. #1 in maternal mortality & new HIV cases, #9 in gun violence. For too many, Kemp’s Georgia doesn’t include them. Why? Because #KempDoesntCare

As Governor, I’ll lead #OneGeorgia that’s #1 for all of us.

That latter comment was the one that made him suggest she should go back to where she came from, and since her family moved to Georgia when she was a child, it's safe to presume he was not referring to Wisconsin or Mississippi.
You really don't need a dog whistle dictionary to know what Perdue was getting at. And it really isn't even a first for Perdue to be obvious with his racist comments--I think we can all recall his "Kamala-mala-mala" moment--he's not better than this. It is what it is.
My only criticism of Abrams comments is that Georgia is actually number two in maternal mortality. The number one spot goes to Louisiana, although Senator Bill Cassidy of LA advises us it would not be so high if we adjusted for black pregnancies. I can't think of any good reason why we would want to exclude certain citizens of his state due to race, but he acknowledges their mortality is higher "for some reason" and even if he declines to mention the reason, I think I could suggest the one he isn't about to say as a working member of the Republican party.
UPDATE: Perdue got his sorry ass shellacked.
at May 23, 2022

You know what that gang-sign is in American Sign Language?