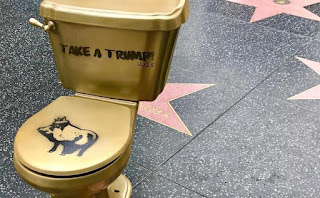 A "four-flusher" is a braggart who actually isn't all he's cracked-up to be. I've thought of Trump as a four-flusher or even a shower for the longest time, which sort of aligned to his peculiar rantings on the problems of water pressure, to wit, his requirement to flush 10-15 times. He was sort of partially confessing to something he was getting away with, as he sometimes does. We need wonder no longer if this was the result of an all "hamberder" diet: he was flushing evidence.

Well, to be more exact--he allegedly was flushing (periodically) White House documents. What they were evidence of is an open question, but having recently heard about the fifteen boxes of WH documents and oddments taken from Mar-A-Lago, and his propensity for ripping up assorted papers while in the White House, it starts to look like a very definite pattern of deliberate destruction.

Flushing feels evocative of a very intentional and knowing act of destruction.

Sure, you could trick yourself into thinking ripping paper was a kind of personality tic to show he was finished with the business in front of him (and the eating of a document--allegedly--who hasn't wondered what history might taste like? clearly gourmandism is a possibility). Surely, journalists seem to be contorting themselves into thinking about how Trump might have inadvertently and sloppily packed somehow fifteen whole boxes ever so innocently and mistakenly, and maybe even more.

But this doesn't seem to be the case, because apparently, some of the documents recovered were very clearly marked as classified and couldn't have been taken without knowing what they were. And to get really wild, we just learned that there are missing White House phone records from January 6th, in that when we all know Trump was on the phone with people, he might not have been using a White House phone or even his own personal phone. Maybe he was using a burner, like Amy Kremer and Eric Trump were using. Or he very well could have borrowed someone else's phone, but that still suggests he was being very deliberately evasive about leaving a record of who he was contacting or that he was doing so at all.

I get all the folderol about presumed innocence, the benefit of the doubt, and so on, but the fact pattern that has emerged with Trump is that he's always creating space between himself and obvious culpability. It starts to look like there had to be culpability in the first place.

What would have been really great is if Haberman told us about the flushing whenever it was she first heard it--because destroying official documents is an obvious problem (although we already did know about the ripping thing). I guess there is a part of me imagining teams of investigators methodically peeling their way through a fatberg in the DC sewer system in search of sensitive docs (They still could be there! The building of a fatberg takes years!) and a president finally being sunk by his own plumbers.

I write these TrumpWorld Grab-bags in the eternal hope that some combination of scandal and shame will accrue to the obvious unfit former guy, but in lieu of any DOJ action, I am left with mockery. And this is one administration that has definitely ended up in the toilet.

Historical linguistics note: I'm pretty sure a four-flusher is originally a 5-card draw poker player with a hand of four cards of the same suit and nothing else, meaning they should have folded immediately after the draw and preferably before. a loser who has wasted everybody's time. An apt characterization of Donald Trump, a terrible gambler who almost always bets wrong, but has been kept in the game by subsidies, from Dad, from Italian and Russian mafias, from NBC, and now from the Republican Party donors who have been keeping his businesses afloat because they just can't live without him.

What about Nancy Pelosi? Remember the state of the union? She took Donald Trump’s address in through her ears and then later took a dump. Why isn’t she being charged with flushing an official record?

"I get all the folderol about presumed innocence, the benefit of the doubt, and so on, but the fact pattern that has emerged with Trump is that he's always creating space between himself and obvious culpability. It starts to look like there had to be culpability in the first place."

One of the factors that has saved him so far from legal consequences is precisely that his guilt is so clear. Surely, we imagine, a person with mens rea is going to be informed by that very awareness of guilt to take reasonable steps to hide his guilt. So, we see Trump doing things like flushing documents, or ripping them up, even eating them, and that must mean he thought he was destroying evidence to hide his guilt, but damn, who could imagine that these measures were any of them effective ways to destroy evidence? Using a burner phone, sure, that might work, but tearing up a document that your staff will later tape back together, is not going to appear to any intact mind that it will do the job of hiding evidence. It will only make your guilt ludicrously evident.

We can live with the idea of a villain as president. It is of course a pretty frightening thing to have a criminal as president, but that idea even has its compensations, as it is always delicious to seat oneself on the moral high ground, and to have the moral high ground over a person as high status as a president is definitely a nice thing. The fact that a president, someone with such power, suffers from dementia is even more scary, and completely lacks any compensatory opportunities for self-congratulation.

We can deal with criminality in a president, not very easily or completely, as our unaccountable willingness to let Nixon cheat the hangman demonstrated, but at least facing up to the idea of a thief in office, then doing something about that, is something we find possible. We still haven't even started facing the mere idea that an obviously demented person was president, and until we do that, we can't figure out practical measures to keep him from returning to power.

Although I don't know is commenter Linus is expected to return, I think it should be pointed out that a photocopy of an document is not an official document pursuant to the records act and she was as free to deface or destroy it as she might have had it been a takeaway menu or a theater program. It actually surprises me when something like that is put forth as a valid "Whatabout?" when you could easily see why it's wrong if you just thought about it a second.