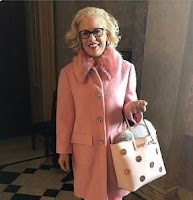 Look, this is really just a comment, because I understand some kind of negotiations with Sinema and Manchin are ongoing, and well! They haven't given me any reason to think either of them are budging on the filibuster but if Biden does, I'll wish him all the luck on that. But Sinema's speech today struck me as trying to box herself in against being negotiated on this. Like, it was totally planting a spear and looking to hold on for dear life.

For what? The dear old filibuster and the specter of bipartisanship that she needs to know is gone. Gone. The House vote was very one-sided--did she not pick up on that? The Republicans giving her kudos on her speech are basically glad the pressure is off of them, because they were never going to do anything on voting in a bipartisan way--and if she had listened to their comments on this, she would know that.

So who the hell is she listening to? Her donors? I think she has badly misread the room and standing for a principle that isn't worth the opportunity we'd be losing in protecting voting rights. I think privileging her notions of what the Senate should be and isn't right now over other people's voting rights is a bad moral equation, even if she thinks it's a safe political one, and I'd really prefer politicians who, when it came down to it, took the moral choice.

But she wouldn't be listening to me, either. And I don't think she's has listened to any Arizonans on this, despite saying so in her speech because she doesn't hold townhalls. Doubtless, her staff are getting some calls from folks right now, and I doubt they are all pats on the back for bipartisanship. Yay! Doing nothing in the forlorn hope Republicans will do the right thing! Brilliant!

She should try to get a better read of the room.

So feminine! I like hos the conservative throw-back costume she has on here lets her inner Phyllis Schlafly shine through. I tease, but she seems to send a message via clothes, but I'm never sure what it's supposed to be. When she made her speech yesterday, some people thought they noticed a cross on her neck, which was puzzling because she's not religious. Turns out, it was a an IUD pendent. Which....ok, but surely she knows that the same state legislatures that are restricting voting rights are restricting reproductive health care rights--and then taking away the means to vote to undo the damage? And it's all one party doing those things. There's no bipartisan solution when one side doesn't believe in human rights. She vexes me.

She is not very intelligent. Like a cockroach, she will probably outlive us all.

Richard--rumor is she is thinking of running for president, somehow, after aggravating most Democrats and not being anywhere near acceptable to the current GOP. They like what she's doing to sandbag the Democratic agenda, but I'm sure that's the full extent of whatever encouragement they are whispering in her shell-like auricle cavities. This seems dumb and yet:

If she's dumb, she's on-purpose dumb. And if she's interestingly dumb, there's probably a good job in political media for her if her political hopes fail. So yeah--I wish being her kind of dumb was borax for six-legged ambition, but no such luck.