Budget Palin Wants To Be Part of the War on Christmas 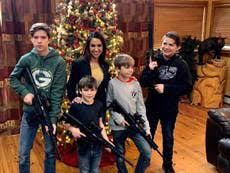 One of the many ways to be a parent in politics is to not expose your children to the white hot spotlight of the gotdamb culture war, but this is apparently not the choice Lauren Boebert has made. She featured her kids in a gun-brandishing Christmas post in support of Thomas Massie, who was being a whole thing there on the internet for a minute. Yeah, very supportive of....displaying weapons of war to celebrate the Prince of Peace, dumbass. Nice job.

But as Dan Crenshaw (also a thirsty boy) has noted, there are definitely some famewhores in the GOP caucus right now. And Boebert was already being a center-stage clown regarding her jihad-squad nonsense regarding Rep. Ilhan Omar, which she has apparently been working out at the open mic nights that are GOP fundraisers for more than a minute. It's tacky, but it becomes her, like flypaper or a glue trap. 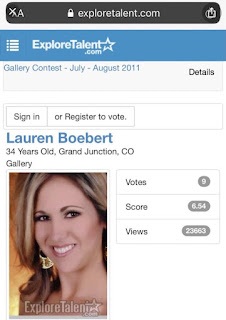 Now, far be it for me to say she's playing at using her own kids and the sacred holy day that is Christmas just to promote her branding, but I will note, that she did get a fundraiser in Las Vegas in support of her Islamophobia, so yeah, definitely.  It's exactly like she goes out of her way to to seek out attention, and is rewarded for it. And she will probably try to benefit herself from getting shut out of her committee assignments, too, because why wouldn't she try?

Because here she is responding to the backlash for her putting guns in the hands of her babies: 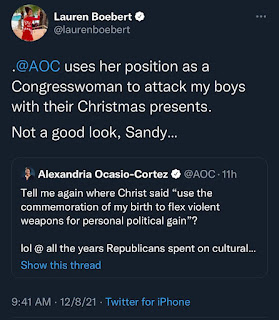 Ms. 1776 over here thinks her act is cute. But Iola Boylan's evil twin is not cute. It might be half-cute, but it's entirely not what anyone should want in a US Representative.

Just a bar-broad doin' Tuesday karaoke. Wasn't all that long ago kids were taken away from drunken, drug-addled parents who needlessly expose their children to danger.

I've got a buddy in Boulder, a small (dying) business owner (racing cams for gas powered motorcycles) who is at this moment having a grand old time asking the Colorado Child Protective Services why those boys haven't been removed from that home when in the past so many others have. Something we know to be true.

Those boys need be in foster homes, the bitch in jail ...

I do feel sorry for those boys. It is not their fault. Hopefully they will be ok. Mom was a monster is something they will be dealing with for a long time.

I can't help but notice all these kids are looking in different directions like they don't really want to be there. The oldest already has a thousand-yard stare going. It bugs me to see this, because she shouldn't have made them stunt for her.