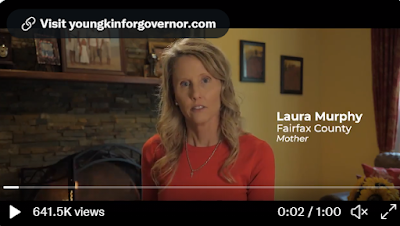 Was it really just the beginning of this year that conservatives were all over the place whining about how cancel-culture was ruining Dr. Seuss and Mr. Potato Head? And now, GOP VA gubernatorial hopeful Glenn Youngkin is hoping to win his race by featuring the "powerful story" of....

A book-banner, Laura Murphy. Her nearly-college age son was assigned a book in his AP English class which he totally could have opted out of reading, but because it gave him bad dreams (so the story goes) she wanted to have a talk with, uh. The manager of books, I guess. Which is all around a really weird reaction to a Pulitzer prize winning novel that is often read in high school classrooms, but probably wasn't really written for young Blake.  Or at least, not specifically, and maybe that's what really ground Ms. Murphy's gears.

Now, the lad was hardly scarred for life by the book, but I don't know. Having his mommy tell everyone he was reduced to night terrors to promote a political agenda feels like he may have other issues in his life. But let's say the book truly did disturb him--what is a parent to do?

How about: talk to your kid? See, this is what bothers me about the whole "anti-CRT" movement as well while we're here. You are raising kids to be adults that will live in a real world where bad things happen. Schools can provide a place of physical safety, but they can't always protect from emotional discomfort. Of course, history and literature have tragic and uncomfortable aspects. But if a parent wants to guide their kid, instead of limiting exposure to difficult topics, how about--talking to them!

But back to the irony--well, there isn't any, really. Youngkin is just reaching for culture war content in the hopes that it nails the race down for him. Sure, you could infer that there's something a little hypocritical about conservatives decrying cancel culture and complaining about woke snowflakes who need safe spaces, when actually, conservatives are fine with cancelling content that makes them uncomfortable and impinges on the safe spaces of white privilege. But that would just be critical thinking on your part.

The culture war wants nothing to do with that, thank you. And unfortunately, an ad where McAuliffe is the bad guy for not sparing young Blake and his concerned mom from the horrors of the icky book might even be sadly effective. I think it's pitiful, because this tells you nothing about Youngkin--other than he thinks this is a winning message, but as policy, it amounts to "Something something schools, something something, I'll let parents pick what books we don't teach."  Which honestly doesn't seem ideal at all.

It's all made up stories. This did not happen to her child I'd wager.

They don't need any of their stories to be true anymore. It really started with Reagan and it's been getting worse every year since.

Then Trump came along. To show them that there's no downside to just saying anything you can think of that will move the ball forward.

I'm skeptical myself. The WaPo story is from back in 2013, but the tendency of conservatives to backfill convenient embellishments into their grievances is something I've come to take for granted, even before Trump. I do think he has made them more brazen about it, and less concerned whether their scary concern of the moment stories are even plausible.

Never thought I'd see the day when a romance novel was controversial.

Though since we're here just what was a seventeen year old boy doing reading romance novels and just exactly what was it that so traumatized him for life? Inquiring minds ...

Turn's out mama's boy is a thirty-something lawyer ...

He's just shy of 30, but he's already interned at the White House and works for the NRCC, and his dad is some kind of lobbyist, so it really feels to me like this family is pretty well connected with the GOP. The original story in 2013 incidentally coincides with--A VA election year. So color me suspicious.