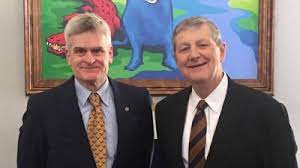 If, as an entire dumb stunt to pretend government is the problem and privileged, elected assholes doing nothing is the obvious solution, I guess, whatever, Okay, GOP, you've had your fun. You're blocking the debt ceiling rise and other valuable things for reasons, and you can't help the kind of useless, signifying creatures you've become since oh, Christ, the 1990's I guess, when Newt Gingrich made government shutdowns exactly your kind of thing. But these two assholes, Louisiana Senators Cassidy and Kennedy, are blocking the measure to avoid defaulting on the debt--imperiling the good faith and credit of this nation they might even allege to love, and are also blocking funding for storm relief for their very own state.

It really doesn't matter to them that the federal government is all that keeps Louisiana alive. So far as they are concerned, this mass of broken tourist destinations, fishers and oil workers are all some kind of doomed, so fuck you, you elected them, The whole state is sinking into the gulf anyways--and these guys are fine with it. They could do better for their constituents or even pretend the folks back home are watching and what they do isn't great.  They should know that. They are party animals and are okay with the continued suffering of their own constituents because of partisan stuff. You never saw anyone so up Trump's ass before John (no not that one) Kennedy, did you?

Republicans are assholes who know the price of everything and the value of nothing. We could replace lead pipes and make sure older folks have hearing aids and teeth and we could make sure our bridges don't even fall down around our necessary workaday commutes, but Republicans don't fucking care.

That's the reality. They don't fucking care. They want to restrict voting not because they hate voters, but because incumbents just don't ever want to get voted out. They want to do the shittiest job imaginable, and not ever be able to be electively leveraged out of a fine-ass job. Do they hate their constituents--shit. They don't matter. They don't care.

Mitch McConnell doesn't give a shit about a whole hell of a lot. He doesn't care if the whole government shuts down, or what the debt ceiling not being raised means for not just our economy, but the world's. Why should he? He has unchecked fucking power even in a scenario where the Democrats are supposedly in the loose majority of the Senate. Because tools like Sinema and Manchin ceded him that for principles that mean nothing.

We could have nicer things if Democrats decided to go for broke, and every last one sided with pushing through a genuinely fairer and more useful scheme with respects to every last concern of the people who voted, despite barriers, their asses in. We could build back better, And your voters might even try to stick around for their Democratic reps if they did fight for a better America. Through midterms, maybe.

But Dems need to separate themselves from old ways and get shit done. Or they won't be convincing later on--when they stand for election. Republicans have no shame about covering themselves in ignominy and doing not one positive thing for their people. Democrats should feel no shame, therefore, about demanding more for theirs.

I will comment. Are they aware of their mortality? Do they think they will live forever? Is this their legacy?

Do they hate us so bad, that they will kill the country? Who are these old men and why
do we have to listen to them.


I am ok with letting them live until they die, which will be soon.

I think about all these Senators who keep running term after term without thought of retirement--but what are they really doing? Grassley is running again, for crying out loud. Probably Inhofe too. Power, and using none of it to do good. They seem to think it's important, but what in the world for? When they could be, I dunno, fly fishing or whatever. Eating ice cream on the sofa and watching soap operas. I don't care--just not standing in the way of progress.