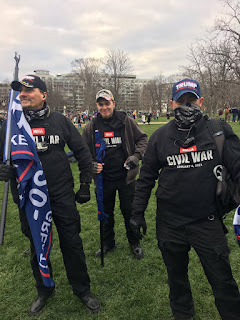 I usually center TrumpWorld Grab Bags on Trump himself and his immediate circle, so I'll kick this one off with Trump, the desperate one-term wonder who for some reason was practically stalking his acting AG with concerns over imagined "voter fraud".  From the piece:

Trump’s calls to Rosen show the degree to which the president was personally involved in such efforts, however, and the ways in which Justice Department officials walked a tightrope of listening to the president while not taking any concrete actions they considered unethical or partisan.

The conversations also offer new clues into the president’s mind-set in early January, when he entertained a plan to replace Rosen with a different senior lawyer at the department — Jeffrey Clark — who was more amenable to pursuing Trump’s unfounded claims of voter fraud. That possibility nearly touched off a crisis at the highest levels of federal law enforcement, people familiar with the matter have previously said.

It really sounds to me like Trump was pretty desperate to hold onto the presidency and was going to use any kind of power he had to try and hold onto it. Maybe that was because once stripped of some of the protections of office, he's back to being legally culpable for his own bullshit, like his and his family's endorsement of MLM products and the possible Trump Org skim from the Presidential Inauguration.  Or who knows what other things (like the still being litigated E. Jean Carroll defamation suit) that the office of the presidency sort of shielded him from. Having the White House Counsel as his taypayer-funded support system must have felt great while it lasted, since he hates paying lawyers.  (I wonder--did Giuliani miss a memo? Because Trump not paying for shit isn't new.)

But this grab-bag is going to focus on Trump allies and why House GOP are seriously wigging out right now, and I think it's because they are so culpable. Take Margarine Tater Grease--I don't know that she's the pipebomber, but she certainly thinks people should have known the bombs were there on January 5th. Now, why would she think that?

Then there's the case of Kevin McCarthy, who wants us to know he did talk to Trump during the insurrection, but only to talk about ensuring that resources would come to where he was hunkered down ASAP--so old Kev is basically copping to knowing it was Trump, not Pelosi, who was supposed to deploy the DC National Guard. We knew that.

You know who was also on the phone with Trump that day--Jim Jordan, who for that reason alone certainly had no business being named to the 1/6 committee very obviously. He got weird when asked about that phone call. So, given what happened that day, how does he not know when exactly it happened? Because something big did happen that they might have had to talk about! It's weird to think that major event didn't lend any context at all to whether they talked and what about or not. So I'm totally calling bullshit.

The Trump Caucus is sticking with their lies. So take the recent exchange with Rep. Andy Clyde and Rep. Jamie Raskin.  He is not in any respects copping to what really happened that day. He was badly freaked out then--and insistent it wasn't no big now.  It is a big deal, but he isn't going to say it out loud where his people will hear.

And take Rep. Andy Biggs. He was all about removing Liz Cheney and Adam Kinzinger from the GOP caucus just now because they are like spies--so what intelligence would they be spilling on, Andy?  What Sekret Elefant Bidness are they going to report back to Nancy Pelosi? Are they going to be telling on stuff like the meeting Biggs already went on with Trump and them to overturn the election that we all already know about?  We know--why bother fussing and calling more attention?

It was apparent even before January 6 something was going down. You could have asked Steve Bannon, and he'd have straight up copped to it.  A lot of Trump die-hards were anticipating that Jan 6th was a big day. Many House GOP  should definitely be aware of at least that much.

So when the seditious G's (Gaetz, Greene and Gohmert) tried to visit the Capitol Hill rioters in jail to elicit some sympathy for them as a total stunt (I don't think they even bothered to call ahead) I see them really trying to cope with where their own seditious asses could end up.  Because yes--all this GOP House behavior lately is kind of suspicious. However should we process it?

I know! It looks bad because it is bad. Lather rinse repeat.

Posted by Vixen Strangely at 1:28 AM