Is the Fact That He isn't Well Going to be A Factor? 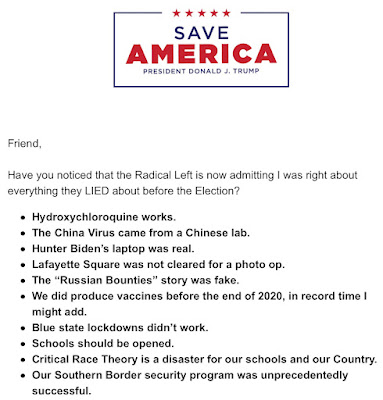 The image here is from a Trump email to his list, and it is batshit. I could just start with the notion that Trump's slogan seems to have gone from "Make America Great Again" (because it wasn't great enough for him as it was) but "Save America"--implying America is not just not as great as it could be, but imperiled. The email goes on to insinuate that the "Radical Left" (whomst are these people?) are now agreeing to certain things that they aren't necessarily stipulating to, or that don't matter, or that are, in fact, batshit--the Radical Left is probably (definitely) not admitting that CRT is a "disaster" and Trump's southern border policy was "unprecedentedly successful" in any plausible way. This is a thing that might exist in Trump's head, and might be shat out in digital form without amendment via cynical hacks in Trump's orbit, but fuck--that's eye-watering stuff.

So is this Vanity Fair piece. He's delusional. He thinks he really won. He doesn't understand that the American electorate comprises more than just his cultic groupies. It includes rational people who didn't want him to keep letting our citizens die of covid and who wanted a person sane enough to even go to funerals and not be weird. He slags Mitch McConnell, Bill Barr, and Mike Pence, oblivious to the tremendous political debts he owes them and how, if they so wanted, they could just end him, and that if they didn't go along with all his petty bullshit, it was for the manifest reason that OH MY FUCKING GOD TRUMP IS CRAZY AND INEPT AND OMG OMG I HATE THESE GUYS BUT NOT GOING OUT OF THEIR WAY TO MAKE HIM A NAPOLEON IS NOT A DING ON THEM!

This person lost the popular vote twice and has been twice impeached, and is under grave criminal liability and has financial concerns out the wazoo. At what stage does the GOP admit that fuck, he was a bad idea and they can do better? (DISCLAIMER: I have no grading of what a GOP "better" is supposed to look like, but not floridly delusional and openly fascist would be a great start for me, even if it's a reach for the current-day Republican party as currently constituted--which is very much a "them" problem, not a "me" problem, thanks!)

Because he's nuts. This isn't me being ableist, this is me having no other language to strongly state that the relationship he has with reality and the relationship the GOP has with Trump's bad grip on reality is extremely unhealthy in every possible way. He isn't just delusional--he's a carrier.

The let-down is slow in the coming but necessary. The only way to look at what "TFG" (The former guy) says now is clinically. He's a weirdo supported by other weirdos. He's really not worth dividing the country over, so much as a horrible example of how rich "eccentrics" are coddled to the point of spoilage. He, his company, and his family, are all kind of bent (tell me Don Jr, looks okay to you all, or that his "Puta Pan" syndrome girlfriend, long past where her stripper gyrations, bandage dresses and telling dick tales manifestations are anything but disturbing isn't a warning sign about Trump family values).

So anyway, um, Trump in exile (if not prison) is the best Trump, and Trump thinking about 2024 is a fucked up Trump that reveals really shitty things about GOP values, because they are still regularly inflating his head with the wrong kind of hot air.

If we're talking about anything but why Trump is a liar (or that beautiful concept, "disinformation" spreader as he admits in the VF piece) and why the GOP supports his unreality, we are definitely not nailing it. His brain is bad (his physicist-adjacent genes aside). That really does need to be a factor.

Yes: ~74 million of them, each of whom is as unwell as he is -- bar the handful who are not in it for the headbreaking, but for the opportunities to steal. (The same, to within the numerical constant, was true of Reagan's voters in 1980.)

Do you have a prescription for this? Better asked: the prescription is obvious, but who could take responsibility for putting it forward? Certainly not you or I.

Trump in prison is my choice. I have other choices, but i do not want to create a martyr for his worshippers.

I want to tell you about how much this trump cult has cost me personally. But then i started to list everything and i realized that nobody will understand. Even the people who understand are tired.
I think he is finished. He left a lot of spawn, but they are nothing.