For the first time EVER, the US government said Russian agent Konstantin Kilimnik provided Russian intelligence agencies with the internal Trump campaign polling/strategy data he received from Manafort and Gates in 2016. Even Mueller didn't go that far. https://t.co/wGNnHdFxRU pic.twitter.com/O9GEjpJ0CG

There is a certain kind of satisfaction in it being officially said out loud: There was a clear connectin between the Trump campaign and Russian intelligence in the 2016 election, and it was definitely not a "hoax". It's also satisfying that Russia will be held to account for their intereference, as The Former Guy was too corrupt and ultimately, weak to do (he would never have seen anything wrong with a little help from his friends--but I've always held that the Russian mob doesn't do anybody any favors that they don't get paid back for--they are not friends).
But more interesting than the economic sanctions put on actors in the election interference scheme, or to me, anyway, is the other Russian sanction: the sanction so many Republicans gave to the sorry mess to start with. Instead of feeling played by foreign interference, they approved of it, forgave it, happily preferred the go along with the hoax narrative (as well as the stupid cover story that no, Ukraine interfered, or whatever). 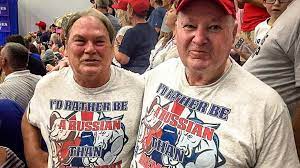 What the polling data was used for is pretty clear based on the tactics of the various Facebook and Twitter posters and fake news sites pushed by the meddlers. They wanted to enhance negative partisanship to where the devil the Republicans knew (Democrats) was demonically worse than they devil they didn't (the shadowy "helpers"). And because they knew who to target, they were successful in 2016.
But it still gets me: they fell (and are still, Alice-in-TrumpWorld-like) down a rabbit hole from "We hate those damn Democrat commies" to "We're are okay with help from Putin". Because they warmed up to the tactics of "The Clinton Body Count" and suddenly Pizzagate didn't sound so crazy? Despite it always being batshit. (Does anything even seem crazy to them?)
After all, the evil Democrats are so bad, they are REPLACING PEOPLE! (Which always makes me think of "Invasion of the Body Snatchers". And maybe it should.)
Posted by Vixen Strangely at 7:38 AM

They are jealous of Russia, with their stong, manly and ruthless leader. Riding horses, shooting things, punching down on the gays, kicking out George Soros and ruthlessly crushing his opponents.

They like that sort of leader - they wish American leaders were like that. And fuck your feelings for good measure, you pussy.

People on the right, like Pat Bachannon and Franklin Graham, have been vigorously extolling the virtues of Putin's Russia for years, which is ostensibly saving Christian European (ahem, white) Civilation from atheistic, socialistic multi-cultural degeneracy. The Russians are playing them as chumps, of course.

Too bad we can't figure out a way to power this nation's electric needs from all of the old anti-Soviet Cold War warriors spinning in their graves.

Btw Vixen, I hate the photo montage check for humanity.