You know, being lectured about whether it's cool to say "Jim Crow" or not about present voter suppression laws passed/proposed by Republicans is mighty Rich (Lowry), but the funny old thing about invoking Godwin is he isn't exactly right about what Godwin said (which was only that in online discussions, a comparison to Nazis will eventually come up--not that one has lost by so invoking, although it usually is over-the-top) and sometimes you have to call a fascist a fascist. But having another National Review writer argue that suppressing votes is good, actually is just--

Well, it's tradition, obviously. Of a long-standing sort. 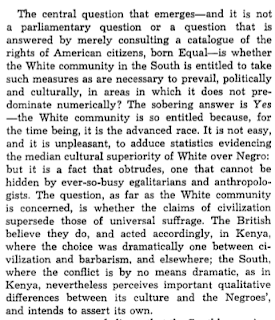 It's really hard to be sympathetic to cries that calling voter suppression laws what they are instead of the GOP's present sleight-of-tongue "voter integrity" are unfair when if we consider what voting can mean to a community in terms of allocation of resources--as our present argument regarding what constitutes infrastructure and who needs it, and as the previous arguments about, for example, the ACA, indicate, demographics do say a lot about what policies are proposed, what laws are enforced, what resources are allocated, and who benefits. It certainly isn't an argument about who is a "better" voter. Or at least, a better educated one.

It's been about race, and we know this very good and well by now. Take the recent NYT story about what motivated the January 6 rioters. It only said something we already knew about Trump supporters in general: they are mad white people mad about white stuff.

The GOP in the post-Trump era is just McCarthyism and anti-civil rights shit interspersed with pro-nuclear family circa-1950s and pro-religion stuff. Witness the Trump campaign's evangelical lawyer (who doesn't seem to know "Do not bear false witness" is one of Moses' top ten) calling Sen. Raphael Warnock a false Christian for saying that the resurrection alone is not the sole message of Christianity. As a Catholic adjacent atheist, I was raised to understand "faith without works is dead" and remain, culturally Christian as a Matthew moralist--I hold that you have to werk for your salvation, honey.

But calling a Black pastor a non-Christian isn't just an echo of denying President Obama his Christian faith as a way of rejecting fellowship with him in mere racism, It's like denying him his Christianity because he's a Commie, the same way the hard-right once denied MLK his faith. Just as the Right today wants to label every little thing to the left "socialist". And use, as a donation-begging scam, the fear of being a traitor to encourage people to subscribe to more funding of this bullshit--otherwise you are a DEFECTOR!  (The term we used to use for people from behind the Iron Curtain who came here to the "free world" or vice versa.)

They aren't a 2021 party--they are regressive and backwards. And suppressive. And yeah, kind of racist.

Posted by Vixen Strangely at 1:47 AM

It would be my pleasure to take a poll test, applied evenly across the board.

I have a high degree of confidence the white-trash not just in west virginny would fail.