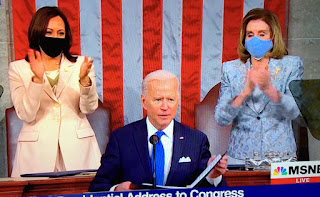 President Biden's speech this evening presented us with good things--policies that will move us forward from the trials and tribulations of the pandemic, the resulting economic damage, and the deep divisions we still feel from the flame-out and attempted insurrection under the former guy, and they were presented with a fervid belief in the possibility and reality of America's greatness. It was a speech that promised to build on the successes of the first hundred days and invited the "other side" to please come along for the ride to do things that would be both really popular and beneficial.

He let us know: we could be creating good-paying jobs for the workers we currently have in a way that uses what we once trumpeted as American ingenuity and the spirit of invention. We could be working to provide cleaner water and safer infrastructure. We could be educating today's kids for tomorrow's jobs. We could be putting our money where our mouths are and invest in the future we want to see--because we believe in America. The ability to pull ourselves up and do better is within our reach, so let's get reaching.

Joe Biden is in favor of the idea of America and the ideals of America. He just wants to do stuff better. Come on, man. Isn't that what we're about?

And you know what? I applauded the hell out of Biden's vision. He promises tough, vigilant national security and a robust economy--I'm for it. He wants us to reform immigration in a way that is not cruel and tries to confront the realities of migration in terms of the economic, political, and environmental challenges people are facing in their nation of origin. He's a realist, not an ideologue, but he does believe in the liberal tradition and the small "d" democracy that are this nation's great heritage. We are a nation made of an idea. And the idea is really good. We should probably do more of it.

( As a side note: Fuck you, Rich Lowry. We aren't a nation in the sense of people bound by blood, religion, or even a common tongue, and the expansion of this country's borders historically, combined with immigration, make the idea of thinking of us in simple geographical terms ludicrous. What are we? A creedal nation. An aspiration nation. An idea set forth by our nation's forefathers. The blood and soil notion has nothing to do with our historical or current experienced reality--but thanks for playing and demonstrating the limitations of trying to even perform discourse with today's "intellectual" conservatives!) 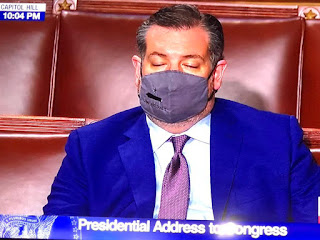 Sleepy Ted Cruz might look like he's just dreaming about Cancun in the picture above, but I think he's really just closing his eyes because the idea of Democrats putting on their work boots to accomplish real things for their constituents while he's just slipping into his clown shoes every morning to do prat falls and seltzer sprays for great culture war justice might almost make him self-aware enough to develop an actual personality instead of just hating libs and calling it a personality.

And I have nothing, not one damn thing, to say about Tim Scott's speech because there is nothing to say about it. It was a Republican rebuttal to a speech Biden didn't give about an America no one in particular lives in, and Joni Ernst, Bobby Jindal, or Marco Rubio all have done similarly out of touch responses. I am unmotivated by the GOP's message regardless of the face they put on it, because the message is always the same: Blame Democrats for stuff and do basically nothing but tax cuts and culture war.

Anyway, my takeaway is that the man the Former Guy once called "Sleepy Joe Biden" is wide awake and ready to do stuff for the American people, and Republicans can't do anything but complain about it. And that just figures. And if they can't even do bipartisanship when it's good ideas that create jobs (do they hate jobs?) or provide health care innovations like lowering insurance premiums and drug costs and funding research for cancer and vaccines (so what, are Republicans in favor of high drug costs and cancer?) then fuck'em and let the electorate figure out who's putting in the hours.

Joe let them know. And I am yet another woman (like Vice-President Harris and House Speaker Pelosi--the historic event of two women behind the president during an address of this nature) happy to stand behind this president and what he wants to do for us--like support VAWA, gun control, equal pay, protections for LGBTQ workers and so much more.

To echo the sentiment from the last Democratic president: Yes, we can! And I want to believe we will.

Posted by Vixen Strangely at 12:30 AM

I'll be right there backing POTUS Biden next to you, Vixen!

I never dreamed that Joe Biden would be, or even could be, this progressive!

And I have nothing, not one damn thing, to say about Tim Scott's speech because there is nothing to say about it.

This is how I feel about just about anything the Right has to say since Biden's inauguration. Not only has the Big Lie returned in full force, but the stupid little lies are a virtual fire hose.

I can't tell how many people believe the BS as opposed to performative lockstep repetition, but I'm tired to preaching to the choir and the very few people on the Right that are speaking up are reprehensible in their own way.

I keep hoping I just need some more time to regroup...