He Got a Bowl! 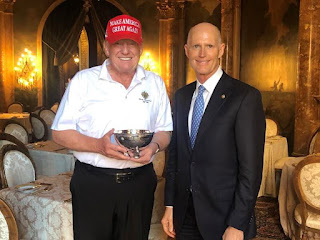 In the interests of keeping the "leader of the party" (as Ronna McDaniel likes to call him, or pretends to like to call him) happy, The Former Guy was finally presented with his participation trophy (as the oracle foretold, I mean, as he whined that he deserved). He has accepted "awards" for less. He's even accepted awards that don't exist. So he got a bowl! It's a nice bowl. It's shiny. I bet he can see himself in it.

That much is okay by me. I think he should be given a nice award ribbon every day with an all-day sucker because it would keep his mouth full and if there's one other thing Trump likes, it's suckers.  But when, oh when, does the GOP stop kissing up to this guy? Because speaking of empty vessels that flatter Trump, Nikki Haley just said she'd back Trump and wouldn't run against him in 2024, and I bet she wouldn't, at that.

But I still don't get what the play here is. He's not getting any younger or more attractive as a candidate. He's actually just going to be more of a grumpy old bastard. It can't be the hope of a family political dynasty: Ivanka is definitely not running for anything, and Don Jr. is, and this just my nonprofessional opinion here, a total mess. So, is it the lingering appeal of white grievance politics and abandonment of all principle they're wedded to?

Sounds like great news for Tucker Carlson, if so. But I don't think it's good news for the GOP or the country.